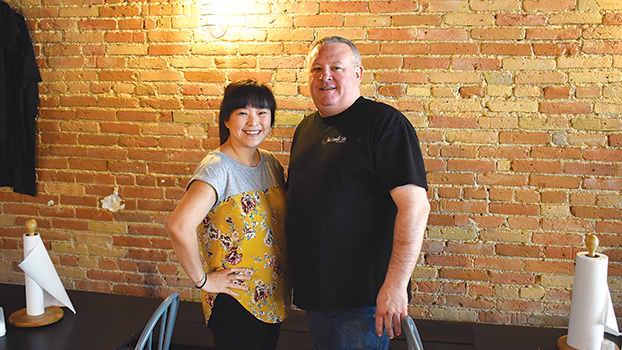 Chefs Daysha Amster, left and Jim Morris, right, and Jayson Zoll, not pictured, are collaborating for a Supper Club. The special menu is part of the pre-Hunter Ice Festival events. (Leader photo/KELSEY HAMMON)

NILES — Wood-fired surf and turf complemented with a lemon blueberry cheesecake for dessert are only two of the mouth-watering menu items making up a local chef trio’s Supper Club offered today.

As part of the pre-Hunter Ice Festival activities, chefs Jim Morris, Daysha Amster and Jayson Zoll collaborated to cook up something unique to satisfy local cravings.

“We wanted to offer something a little nicer, reservation style, without having to go out of town,” Morris said. “It’s an opportunity in between what Niles already has and what you are going to go pay for in South Bend.”

Two Supper Club reservation slots are available starting at 6 and 7:30 p.m. today. The Supper Club will take place at Morris’ restaurant Paris Soda Co., 220 E. Main St. Reservations are required and can be placed by calling or texting Morris (269) 449-8144 or emailing him at jimssmokincafe@gmail.com. Cost is $30.

Both Amster and Morris said the Supper Club serves as a way to test what else customers want to see on the menu.

Amster is a former restaurant owner. She operated Olfactory Hue Catering & Bistro in downtown Niles for five years and was well-known by customers for a number of her dishes, including her macaroni and cheese. She closed shop in 2017 to concentrate on spending more time with her family. Today, she serves as community kitchen coordinator for Martin’s.

Morris is also known among the local culinary circuit. He has been a restaurant owner since 2014 and used to operate Jim’s Smokin’ Café, where he served up a variety of in-house smoked barbecue from inside the Wonderland Cinema. Two years ago, he took the opportunity to revive a local restaurant landmark and opened Jim’s Smoking Cafe at the Paris Soda Co. Customers can now enjoy barbecue and an expanded menu that includes gelato and a variety of craft sodas.

The menu will include four courses. There will be an option of salad or soup, appetizer, entrée and dessert. People are also welcome to bring their own beer.

For the entrée, Morris will serve wood-fired tenderloin tips and large shrimp. Amster will be whipping up eggplant cigars — stuffed with blue cheese, walnuts and balsamic drizzle. Amster will also make a lemon blueberry cheesecake for dessert. The menu item frequently sold out at Amster’s former restaurant, Olfactory Hue Catering & Bistro. Zoll will round out the menu by creating a winter-inspired salad.

With the Hunter Ice Festival just around the corner, the chefs said they are looking forward to seeing the downtown bustling.

“When I owned my restaurant, I would just come out and listen to the buzz,” Amster said.

As to why they would encourage people to come out, Amster said customers would leave with their stomachs happy.

“If they like good food, they are coming to the right place,” Amster said. “There are three chefs in the house, man.”