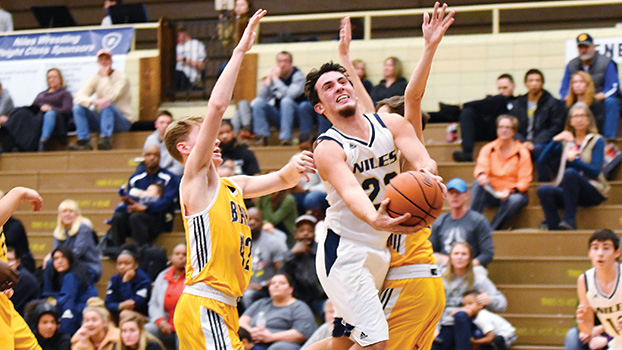 Niles’ Brayden Lake drives to the basket against St. Joseph Friday night. Lake had 14 points in the Vikings’ loss to the Bears. (Leader photo/KELLY SWEENEY)

NILES — The rebuilding of the Niles boys basketball team got a bit harder over the Christmas break as several players were dismissed from the team, while some other decided to go in a different direction.

First-year coach Tyler Dendy does not wish any of those players ill will, and instead, would rather concentrate on the players who are still in the program.

Those players put up a good fight against visiting St. Joseph in a SMAC West Division squad Friday night.

Despite the 54-46 loss to the Bears, Dendy was pleased with the effort his squad put forth.

“We now field a very young team with two freshmen, four sophomores, three juniors and a senior,” he said. “This group has overcome a great deal of adversity the last few weeks, and I am excited to watch them grow throughout the season.”

The Vikings kept it close in the third quarter, but trailed 39-32 heading into the final eight minutes of the contest.

Niles (2-6, 0-5 SMAC West) cut the St. Joseph lead to just two points midway through the fourth quarter, but was never able to overtake the Bears.

“Offensive we are focusing on putting ourselves in good positions and making sure we are all on the same page,” Dendy said of the plan moving forward. “Execution is the biggest thing. We need to find different options off of what we are doing. If one guy in basketball is off, that can affect the other four. We went back to fundamentals and kind of broke down everything. We went back to shooting, to one-on-one defensive stance and defensive slides. We also worked on our offensive and defensive concepts.”

Two players with the most varsity experience led the Vikings against the Bears Friday night.

“We are hoping to move forward and get better at all aspects of the game,” Dendy said. “We are really young now, so we had some scrimmages over break and I think that really helped out kids. I think last night (Friday) we really competed against St. Joe. They obviously have more experience than we do, but I felt we never quit, and we made them earn that victory.”

The Vikings hit the road for a non-league contest Tuesday night as they face a surging Dowagiac squad that after a slow start has won back-to-back games.

The two teams were deadlocked at 9-9 after one quarter, while both teams struggled to score points in the second quarter.

Niles outscored the Bears 15-6 in the third quarter and looked to be on its way to a victory as it took a 26-19 lead into the final quarter.

But St. Joseph rallied and outscored the Vikings 21-13 to pull out the one-point victory.

The Vikings return to action Tuesday as it hosts Berrien Springs in a non-conference contest slated to begin at 7 p.m.