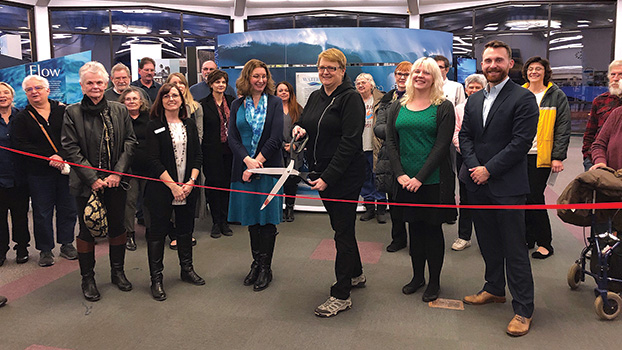 Nancy Studebaker, the Niles District Library director, prepares to cut through a ribbon during a Grand Opening Ceremony of the Smithsonian Water/Ways exhibit. (Leader photo/KELSEY HAMMON)

This was just one of many facts discovered at the Water/Ways Smithsonian exhibit, where those who visit are likely to gain a new depth on the importance of water.

On Friday, the Niles District Library and Niles History Center celebrated the exhibit with a Grand Opening Ceremony and ribbon cutting. For the next month, the exhibit will be available at the library. Through Feb. 16, the exhibition will include multiple programs, where people can hear from experts, participate in hands-on activities and tour water infrastructure. The Niles History Center will host an accompanying exhibit at the Fort St. Joseph Museum, centered around local waterways. The events are free and open to the public.

Friday’s event drew more than 100 people to visit the renowned display. Mayor Nick Shelton was among those who addressed the crowd.

“In the midst of a government shutdown, where the Smithsonian Institution and just about everything else in Washington D.C. is closed,” Shelton said, “Niles has its very own Smithsonian exhibit that is open for business.”

Niles was one of six sites selected to display the exhibit out of an applicant pool of 30.

“If not for the hard work of the Niles District Library, they might not have been selected,” Shelton said.

He emphasized that the St. Joseph River and Barron Lake had played a crucial role in Niles’ history. The Hunter Brothers Ice and Ice Cream company, which saw economic prosperity harvesting ice from Barron Lake is one testament to this. The Hunter Foundation was created from the company and still funds local efforts.

Arquette-Palermo said she would be conducting social research Saturday and speak with residents to collect stories about how their lives and heritages connected with water.

For his part, Dempsey discussed the five Ws of water: wonder, waste, wise, warning and we.

Dempsey emphasized that the Great Lakes make up 20 percent of the planet’s surface fresh water.

“It’s a very scarce resource that we have a large share of,” Dempsey said.

Throughout history, Dempsey described the ways that humans have polluted various water bodies, resulting in disasters like Cuyahoga and Rogue rivers catching fire and the death of birds and other water life, to name only a few. While he said humans had since become “wise” to the ways to reduce pollution and protect the resource, there is still room for improvement. He asked people to be vigilant of warning signs that could indicate trouble to water resources.

“We have the power to protect the Great Lakes,” Dempsey said. “In this coming century of water scarcity worldwide, … we have the challenge and responsibility to protect the world’s fresh water.”