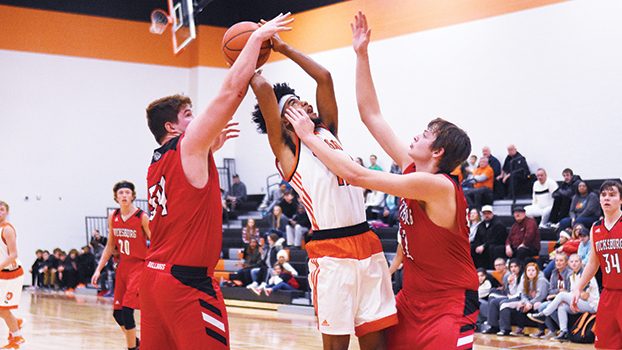 Dowagiac’s Dashawn Brooks (middle) is fouled as he goes up for a shot in the Chieftains’ 66-51 win over Vicksburg. (Leader photo/SCOTT NOVAK)

DOWAGIAC — After getting off to a slow start, the Dowagiac boys basketball team could be figuring out the right formula for success.

The Chieftains defeated arch rival Edwardsburg in the game before the Christmas break, and then returned to the court Friday night, to take on visiting Vicksburg in another Wolverine Conference South Division contest.

The results were similar in both contests.

Dowagiac did not get off to the quickest of starts, but turned up the intensity in the second half to pull out a 66-51 victory over the Bulldogs.

Veteran Chieftain coach Danum Hunt said his team worked hard over the break and appears to be ready to break out.

“We started out great, and then we went into a little funk,” Hunt said. “We just stopped playing defense. But in the second half, we got back on it, and we turned them over several times and that led to some easy scoring opportunities.”

Hunt knows that if his team is going to get above and beyond the .500 mark, it is going to have to work hard at both ends of the court, but especially at the defensive end.

The Chieftains also went to the free throw line early and often. Dowagiac has struggled in previous games from the line, but were 21-of-30 against the Bulldogs.

Dowagiac, which is known for its outside shooting, had a more balanced approach as the Chieftains connected on nine 2-point baskets and nine 3-point baskets.

“We had a pretty good balance tonight,” Hunt said. “They played a zone, which slowed us down a little bit, but I told the guys to be patient. When we were patient, we were able to get the ball inside and score as well.”

After trailing 29-27 at the break, Dowagiac outscored Vicksburg 18-15 in the third quarter to take a slim 45-44 advantage to the final quarter.

Dowagiac exploded for 21 points in the final eight minutes, while holding the Bulldogs to just seven points.

The Chieftains will host Niles Tuesday night in a non-conference contest as they hope to extend their winning streak to three games.

Tipoff is set for 6:30 p.m. There will be no JV contest as Niles has cancelled is JV season. The freshman game will tip off at 5 p.m.

The Dowagiac girls basketball team is still searching for that winning formula.

The Chieftains dropped a 54-32 Wolverine Conference South Division game to visiting Vicksburg Friday night in which the Chieftains led 10-9 after one quarter.

But because of inconsistencies at both end of the court, Dowagiac was unable to maintain its lead.

“Our physical effort is there,” said Dowagiac coach Brent Nate. “It is our mental preparation and how to win on a consistent basis. It is something the program hasn’t done in a while, and we are trying to get there. We want to win, but we have to figure out how to weather storms when things start to go bad.”

After taking the lead into the second quarter, Dowagiac turned the ball over a couple of times and missed some shots, including uncontested layups, and found itself down 10 points.

Within a matter of moments, that two-point deficit turned into a 10-point deficit and for all practical purposes, the game was over.

The Bulldogs took a 23-14 lead into the locker room at the intermission and then steadily pulled away in the second half.

Senior Taylor Pye returned from injury and gave Dowagiac some solid play inside with rebounding and five points.

The Chieftains are off until Friday night when they travel to Three Rivers for a Wolverine South contest. Tipoff is set for 5:45 p.m.