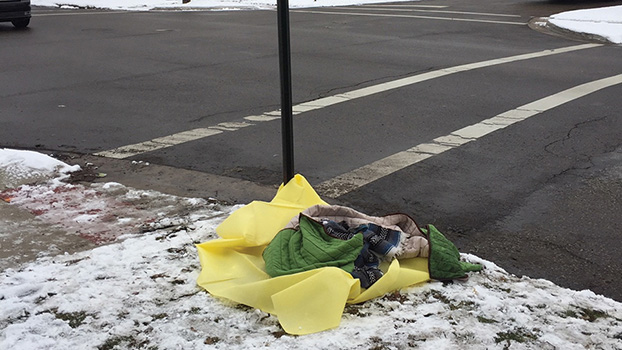 A car versus pedestrian accident took place Thursday at the intersection of N. 13th and Sycamore streets. (Leader photo/KELSEY HAMMON)

NILES — The Niles City Police Department is investigating a car versus pedestrian accident that took place Thursday afternoon at the intersection of N. 13th and Sycamore streets in Niles, according to dispatch.

Debrah Smith, who lives at 301 N. 13th St., said she saw the aftermath of the incident. Around 3 p.m., Smith said she saw three children who appeared to have been injured. While Smith said she only saw the result, she believes a car ran a stop sign. She described one of the children lying in the street. She said it appeared that two other children were nearby and also injured. According to Smith, emergency responders arrived to help the children and one was taken away by ambulance.

“I was scared,” Smith said. “I have an 8-year-old and I have almost a 6-year-old. I tell them, you have to stay over here [on the sidewalk] to play. I wish they could patrol this more. I do see cops once and a while, but they don’t patrol enough.”

At the corner of 13th and Sycamore, a green coat and tarp appeared to have been left over from the scene. The intersection is less than a mile from Eastside Connections.

This is a developing story that will be updated with more information.