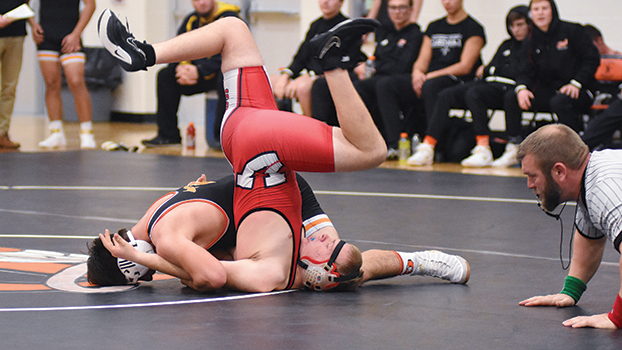 DOWAGIAC — The Dowagiac wrestling team wrapped up the home portion of its 2018-19 schedule in style with a sweep of Wolverine Conference foes Vicksburg and Plainwell Wednesday night.

The Chieftains defeated the Bulldogs 66-15 and then knocked off the Trojans 51-21.

As a result, Dowagiac is now 13-5 overall and 5-1 in the Wolverine Conference.

Part of the success of the Chieftains this year has been the improvement of its returning wrestlers, including junior Lamberto Paredes.

Paredes picked up a pair of wins Wednesday night to improve to 21-5 on the year.

“A lot of it is confidence,” said Dowagiac coach Colin Burandt. “He knows he can wrestle with the best of them. He is just a hard worker. Regardless of whether or not he is out-matched, he is gong to continue to work, and sometime hard work can beat talent.”

Burandt said there have been no particular changes to Paredes from last season other than his growing confidence.

“I think the only thing he has really changed is that he has more confidence in shooting against an opponent and he is going it a lot more. He is trying to get more takedowns and is looking to score all the time.”

Davis is the Chieftains’ back up heavyweight, who picked up a pair of victories, one of which was a forfeit.