Robo Rangers get to work 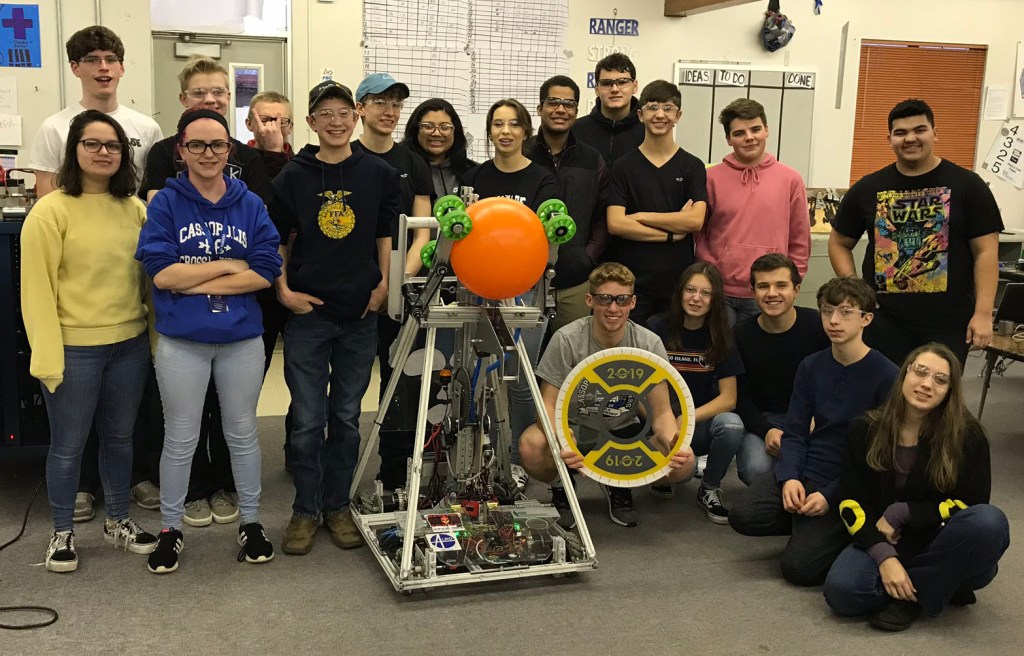 CASSOPOLIS — Tightening bolts, programming motions, or climbing steps and stacking objects might not be the first thing that comes to mind when people think about high school athletics or competitions. But for the Cassopolis Robo Rangers, getting the bolts tightened and stairs climbed is when things get exciting.

On Saturday, the Robo Rangers were given the parameters for the 2019 robotics competition season, for what could be their most complicated design and tasks yet. This year their robot has to complete two primary tasks as part of the destination space theme. The first is to “load the ship,” which means the robot has to shoot balls (cargo) onto a ship before takeoff. The robot also has to climb aboard a ship, which will be a one-foot platform.

“This year is going to be quite different. The design will probably be more challenging,” said Chayla Doulv, the Rangers’ team captain. “It’ll take a lot of creativity from everyone and present a good challenge.”

Doulv is in her third year with the Robo Rangers and has been a part of past winning teams, or teams that make the Rangers what team supervisor Jessica Ayers calls “a decorated team.” Neither Doulv or Ayers would have called themselves robot people a few years ago. Ayers started working with the team simply because one of her children participated. Doulv joined the team because of a friend’s invitation. Now the seasoned supervisor and team captain are fully invested in the team and expect another fun, competitive season.

“We’re proud to be a small-town team that competes at a high level,” Ayers said.

In the eight years since the team was established, the Cassopolis Robo Rangers have won 11 awards, qualified for the state competition twice, and qualified for the world competition in 2017. Michigan is also one of the most competitive robotics districts in the U.S., according Ayers. She believes the team’s accomplishments are substantial, given their size, place and resources.

“We have 40 sponsors overall and we’re competing against some teams that have only one sponsor – teams that have General Motors as sponsors. It’s tough but we hold our own,” she said.

Competing teams have a budget cap of $1,500, according to Ayers. While there are certain restrictions regarding cost, materials and mechanics, she does not see them as a problem.

“I think it’s great because it forces them to be very creative. Narrow parameters brings out very creative solutions,” she said.

The Robo Rangers have six weeks to design, construct and program their robot. After the six weeks is up, the team will have to literally bag their finished product until the first competition. In honor of the destination space theme, the Rangers have also decided to dedicate their robot to Iven Kincheloe Jr., a Cassopolis native who is considered to be the first man in space after being the first recorded pilot to fly over 100,000 feet.