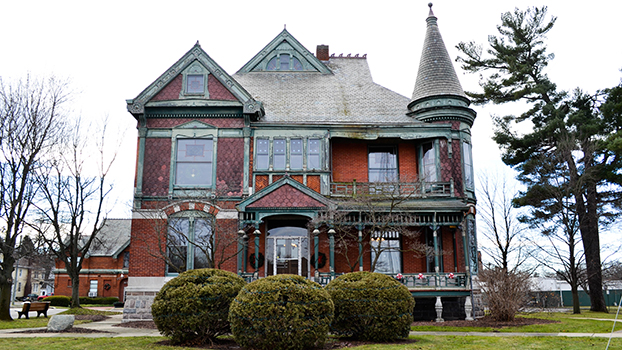 NILES — A fundraiser to support the Chapin Mansion will give people a chance to be part of history.

The Niles History Center launched a Chapin Mansion Access for All campaign, which is available online. Funds will be used to repair the front porch and upper balcony. The addition of an ADA-compliant ramp is also planned.

Christina Arseneau, the director of the Niles History Center, said the porch had been roped off due to its state of disrepair. That means the mansion is only accessible through a set of stairs and a side door.

Arseneau said they hope to raise $15,000 through the online campaign, which will be matched by the Michigan Economic Development Corporation. The deadline to raise funds is March 8. As of Wednesday afternoon, the campaign had raised $332.

Arseneau said the mansion is an integral part of Niles’ past and future.

“[Donating] is a way to be part of community history,” Arseneau said. “So many people have been a part of Chapin Mansion history. When the building was city hall, we have people who have memories taking out their marriage license or registering to vote here.”

She said one of the project’s biggest goals is making the mansion accessible to people of all abilities with the addition of a ramp. Last year, she said a child in a wheelchair could not access the mansion during a field trip. A senior facility turned down a tour because access was an issue, too.

Those who contribute $10 or more will have their name listed on a panel that will be displayed in the mansion.

“You can literally have your name in history, which is pretty neat,” Arseneau said.

The history center has been earmarking funds and obtained grants. So far, they have raised enough to cover about 85 percent of the $275,000 cost.

The Chapin Mansion was built in 1882 and donated to the city by the Chapin family. Inside the home, ornate wood fixtures, stained glass windows and Queen Anne architecture give the building a distinctive character. The building once served as city hall but is now open for people to tour.

The history center has also used the home in a variety of modern ways to bring more people to its door. For the last two years, a Harry Potter-themed event has attracted witches and wizards of all ages to visit the mansion. Each holiday season, the historic structure is decorated from the inside out.

“We are trying to get a whole new generation of people interested in the history of the building,” Arseneau said.

Arseneau said the plan is to begin construction in the spring. With the porch fixed, she said she believes it will bring more people to the mansion.

“[The porch] is a beautiful backdrop where people can visit up there and take pictures,” Arseneau said. “Just enjoy that space, which they are not able to do right now.”

People looking to contribute to the cause can visit the Niles History Center’s Facebook page, where a link to the campaign is available. Those wishing to donate money in person are welcome to drop by the mansion, 508 E. Main St., with cash or a check.