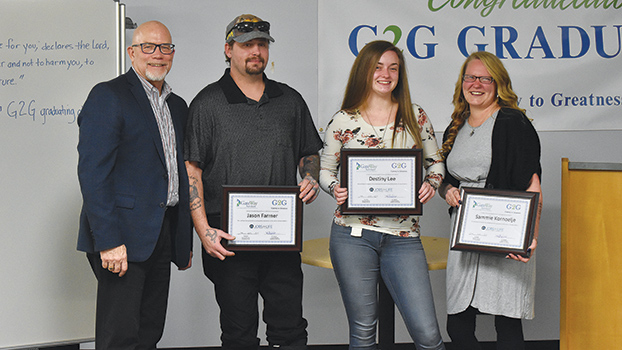 NILES — Destiny Lee pumped her fist in the air Tuesday night as she graduated from the Gateway to Greatness Jobs for Life program. Lee accepted a certificate with a grin during a ceremony at the Niles District Library.

Lee had more than one cause to be ecstatic Tuesday. Thanks to help from the program, the recent graduate also had a restaurant job lined up.

“I got a job today and I feel real good,” Lee said.

The occasion was a momentous one, because Lee was one of three graduates to complete the first-time program. Lee graduated alongside Jason Farmer and Sammie Kornoelje, who were also recognized with certificates.

During a commencement that night, Ric Pawloski, the program manager, said Tuesday’s graduates were blazing a trail for others who face barriers to employment.

“You guys started the program,” Pawloski said. “You got it going. I’m looking forward to it growing just the same way as it grew when I was in Benton Harbor.”

Prior to coming to Niles, Pawloski ran a similar program called Mosaic in Benton Harbor. Late last year, he initiated Jobs for Life in Niles. The six-week, faith-based course is put on by Gateway Services, a Niles nonprofit. The goal is to help those who face employment challenges find a career path. For some those obstacles are past incarceration or former drug addiction. For others it is simply age or a life setback. No matter why they enroll, Pawloski said he hopes to help students find their passion in the working world.

The classes take place from 9 a.m. to 2 p.m. Tuesdays and Thursdays at the Niles District Library. Those who participate learn interview and application writing skills, as well as self-esteem and managing work place conflict. Students also earn a stipend, which is reduced if they miss an assignment or a class.

“Jobs for Life program under Ric and other places has had great success,” Smith said.

A former student of Pawloski’s shared his success story during the graduation that night.

Justin Wright is now a manager of a café at Lake Michigan College. Before he got the job, Wright said he struggled with drug addiction. When he enrolled in the Jobs for Life program in Benton Harbor, Wright confessed that he did not initially see the value of the classes.

“When I first came to class, I really didn’t like it,” Wright said. “I didn’t want to be there.”

However, during one class something resonated with Wright.

“Through Jobs for Life, I gained a sense of confidence and a hope for a better life,” Wright said. “I hope it can do for you what it has done for me.”

That night, graduates shared stories that were similar to Wright’s.

Lee and Kornoelje said one of the biggest things they gained from the program was a sense of confidence.

“Ric pushed me to have confidence in myself and know that I am good enough,” Kornoelje said. “It’s a great program.”

Lee also encouraged others to take advantage of the program.

“Give it a try and [I would tell them] to not give up,” Lee said. “Have hope and faith in yourself. It’s nice to know that somebody cares.”

The next Jobs for Life program will begin Jan. 22. The program is free and open to those who experience employment barriers. To sign up, applicants need to email Pawloski at rpawloski@gatewayvro.com. To learn about Gateway to Greatness, visit gatewayvro.com.