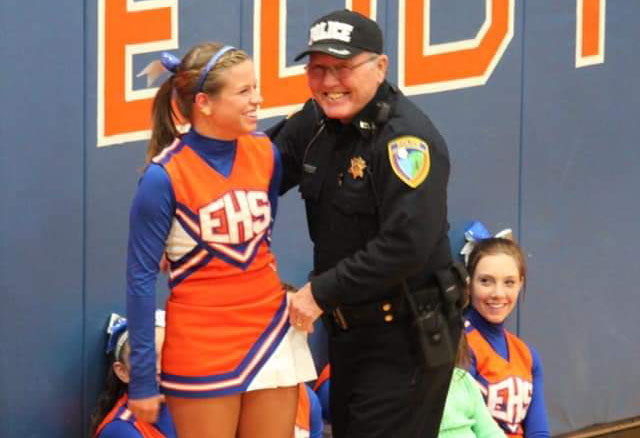 EDWARDSBURG — Every town has one — a dedicated, kind-hearted member of the community who fulfills their duty with pride and diligence. Jack Maynard, a longtime reserve police officer for the Ontwa Township Edwardsburg Police Department, died Monday, Dec. 31 after a second bout of cancer, but he left behind a legacy of loyalty and kindness in the Edwardsburg community.

Since the early 1980s, Maynard served with the Edwardsburg police reserves, along with other area reserves such as Niles. According to those who knew him best and worked most closely with him, he was an officer of the people, one who could connect with the people he served on an unprecedented level. They say Maynard was also a willing volunteer, always taking opportunities to fill in and come along side officers who needed the help.

“I can’t begin to tell you how much he’s done,” said Ontwa Township Edwardsburg Police Chief Doug Westrick. “I appreciate most that he was always available to come in and assist officers.”

Maynard was also a consistent security volunteer at the Edwardsburg schools for games and other school-related events simply because he enjoyed students.

“He worked a lot with the kids, and the kids all loved him,” said Carol Maynard, Jack’s wife. “In general, that was his life. He loved the department and Edwardsburg.”

Sergeant Kevin English worked with Maynard for several decades and said he was an exemplary officer and member of the community. Not only did Maynard serve and volunteer, but he did so gladly, almost always for free, while running into his share of problems.

But it was not Maynard’s ability to attract and detect trouble that English most admired about his close friend and fellow officer, but his unwavering commitment to the people he served.

“Jack was a fixture here. For the last 30 years he was continually here.He always did stuff, did it because he enjoyed it and did it out of dedication to community,” English said. “He was truly a dedicated individual. It wasn’t a job. It was a calling.”

Jack’s calling did not end when he was first diagnosed with cancer in February 2016. While he was going through treatments he was eager to get back to work. When he was diagnosed again in February 2018, he remained optimistic and worked when he could. Carol said he was willing and hoping to return to duty and to the golf course until the last two weeks of his life. Although his life waned slowly, Jack’s kindness and loyalty toward his community remained strong.

Even after his passing, Carol remains in awe of his dedication to the people in his life.