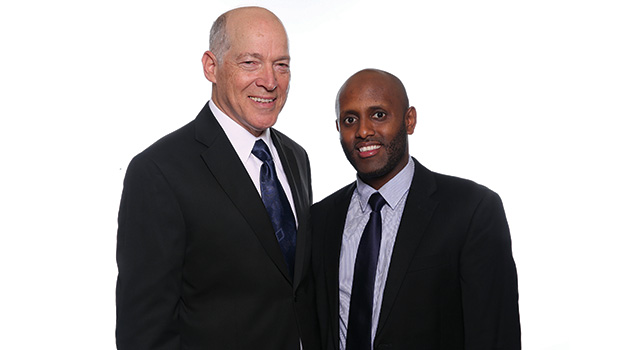 From left, Max T. Russell and Jean-Leonard “Kaka” Kayiranga Kagabo are pictured. Russell and Kagabo, a Brandywine graduate, collaborated to write a book about the genocide Kagabo experienced growing up in Rwanda. (Submitted photo)

NILES — Every day after work, Jean-Leonard Kayiranga Kagabo would stop at writer Max T. Russell’s home to share stories about his life growing up in Rwanda.

Kagabo is one of few in his family to survive the rampant genocide that plagued the country in 1994. The stories were not always easy to share, but Kagabo had a goal: turn his memories of survival into a book that would resonate with others and keep his story alive.

After three years of storytelling, Kagabo and Russell’s work has culminated into an autobiography that captures Kagabo’s life during that period. The book, “Angels on My Path,” was released earlier this month.

“I’m so happy [and] so excited,” Kagabo said. “At some point, I didn’t think it would be possible, just because of the amount of work it takes to write a book.”

Kagabo grew up in Kimisange, a rural town outside of the country’s capital of Kigali. He lost six of his family members to genocide.

In 1998, Kagabo moved to Niles, after his sister Marie-Rose Semuhungu and her husband Faustin Semuhungu sponsored him to come to America. He enrolled in Brandywine High School, where he had to learn the English language. Since his sponsorship, the Bobcat has continued to prove his perseverance.

Kagabo played varsity soccer for the Bobcats, helping to lead the team to their first regional appearance in years. In 2001, he graduated from Brandywine, after only two years of courses. He continued to earn a bachelor’s degree in biotechnology at Ferris State University in Big Rapids.

Today, Kagabo is a senior analytical chemist at Covance Laboratories outside of Indianapolis. He is married to Diane Umulisa Kagabo. They have one son, 4-month-old  Zaiyn Jacob Ndindabahizi Kagabo.

It was a chance encounter about three years ago that gave Kagabo the opportunity he had hoped to share his story. Kagabo had run out of gas in the middle of an Indiana roadway one summer day, when Russell, a newspaper columnist and author, pulled over to help him out. The pair struck up a conversation and Russell was inspired to hear more of his story — thus, kick-starting their daily talks.

Kagabo said he was inspired to relive the tragedy he experienced to give a voice to survivors and victims alike.

The 1994 genocide caused the massacre of more than 1 million Tutsi people in the span of 100 days. The perpetrators were Hutu extremists.

While the brutality he experienced was an essential part of the story, Kagabo wanted to share how his family had lived before the conflict tore them apart. He said readers would find happy moments too and hopefully learn something about his culture.

For his part, Russell said he was grateful for the opportunity to help Kagabo tell his story. He described Kagabo’s spirit, despite what he experienced as inspiring.

“As we started getting into this story … he was not used to people asking him all these questions,” Russell said. “He would talk about things he had not shared with anyone. Since he wanted to do this book, he didn’t want to pull any punches and he was not bitter. He just is not a bitter guy.”

When people read his story, Kagabo hopes they learn his story and also his ability to cope with what he experienced.

“Once they go through the book, I hope they can find something positive,” Kagabo said. “It is not [just] to see all the horrible things that happened to people, because everyone here in this world wants to live a good life. We all strive to do well and lead a good life.”

The release of the book this year marks a particularly important moment. 2019 marks the 25th anniversary of the 1994 genocide in Rwanda. The Rwandan community in Indianapolis will join forces with those in southwest Michigan to host a commemorative event. Kagabo has been invited to take part and share his story.

Kagabo’s book can be purchased on Amazon.com. A Kindle edition of the book is also available online.