One injured in three-car crash 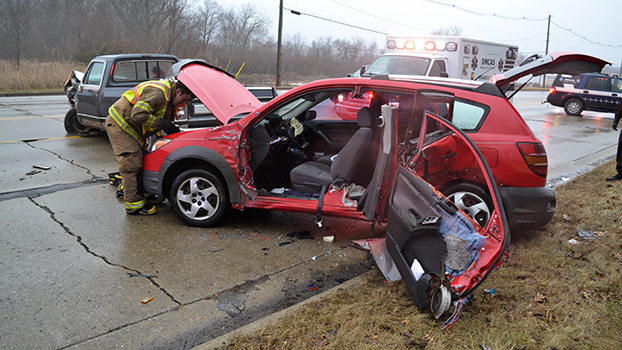 Cars were towed away Monday afternoon after a three-car crash on S. 11th Street.(Leader photos/EMILY SOBECKI)

NILES — One man was injured in a three-car crash Monday afternoon in the 1500 block of S. 11th Street.

The crash occurred at approximately 2:30 p.m. Berrien County Sheriff’s Dep. Jason Haskins said authorities are still investigating how the cause of the accident.

The crash involved a white Pontiac Grand Prix, a red Pontiac Vibe and  a Ford truck. The driver of the red Pontiac Vibe had to be extricated from the car with the jaws of life. Haskins described him as a male in his 70s. He was taken to Memorial Hospital in South Bend. Haskins said he did not know the specifics of his condition, but said he was stable when he was freed from the car.

In addition, there was one driver in the truck and two people in the white Grand Prix. The driver of the red Pontiac was the only one who needed medical attention, Haskins said.

Rain was falling on Monday afternoon when the accident occurred. Haskins said emergency crews were still trying to determine if weather was a factor in the crash.

The two northbound lanes were temporarily closed while crews worked at the scene. The Michigan State Police helped to divert traffic on S. 11th Street throughout that process. In addition to the Berrien County Sheriff’s Department, the Niles Township Fire Department and SMCAS ambulance services were on the scene.

More information about the crash will be available when the investigation concludes.