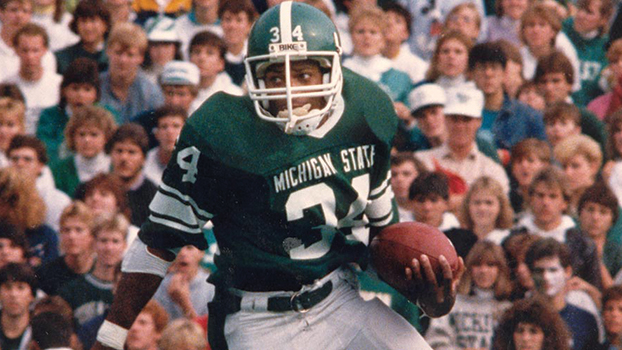 Former Michigan State running back Loreno White has been elected into the College Football Hall of Fame. (Leader photo/Submitted)

The 2019 class, which features 13 players and two coaches, was announced Monday morning by the National Football Foundation and also live on ESPN’s SportsCenter.

White is the most accomplished running back in the rich history of Michigan State football, ranking first in the school record books in rushing yards (4,887), rushing attempts (1,082), rushing touchdowns (43) and 100-yard games (23).

The two-time first-team All-American and All-Big Ten selection (1985, 1987) finished fourth in the Heisman Trophy balloting in both of those seasons. His 4,887 rushing yards ranked second in Big Ten history following his departure from East Lansing and still rank eighth all-time in league history. He was named the No. 1 running back in the Big Ten in the 1980s by the Big Ten Network and led the Spartans in rushing four consecutive seasons (1984-87).

“I was very, very happy when I received the news,” said White. “A lot of people expected it, but then you just never know. When I found out, I was like ‘oh my God, it happened,’ so it was very exciting.

“I didn’t get a chance to win my ultimate goal of the Heisman Trophy, but this honor is what it’s all about. I’ve always been a team player. I couldn’t have done this without everyone that blocked for me and everybody that played defense so we could get the ball, and I say that on defense because they were just as excited to get the ball for me so I could have a chance to accomplish these records.

“I can’t just thank one person. That team part is really important to me. You have the offensive line, the tight ends, the quarterbacks, the receivers, they all had a hand in throwing a block somewhere. But I definitely have to thank Coach Perles because of the way he handled me and getting it all kicked off and started.”

As a sophomore in 1985, White rushed for a school record and then-Big Ten record 2,066 yards. His 1,908 yards during the regular season at the time was the fourth-best single-season rushing total in the history of college football and the highest by a sophomore. He rushed for 200 or more yards on four occasions, including a 286-yard effort against Indiana, and his 11 100-yard games in 1985 are still a school record. White was named the UPI Big Ten Co-MVP and also the college running back of the year by the Touchdown Club of Columbus and the Washington, D.C. Touchdown Club. He also earned MSU’s George Alderton Award for male athlete of the year and the team’s Governor’s Award for Most Valuable Player.

During the 1987 season, White helped MSU to its first Rose Bowl since 1966 by rushing for 1,572 yards, second in school history at the time and still fourth in the Spartan record book. His 132.6 rushing yards per game during the regular season ranked No. 6 nationally. In the Rose Bowl win over USC, White ran for 113 yards and two touchdowns. White earned his second Big Ten MVP award from UPI in 1987 and was also named the Chicago Tribune Silver Football winner, which is given annually to the best player in the Big Ten.

“When you came in, you always wanted the ultimate,” remarked White, who also won the Governor’s Award as a senior. “You wanted to win your conference, win the national championship, and go to the Rose Bowl, which is ‘The Granddaddy of Them All.’ They always talked about the Rose Bowl when I was younger, and for us to put together a season that we had my senior year and to go finish it off in Pasadena with the win was incredible.”