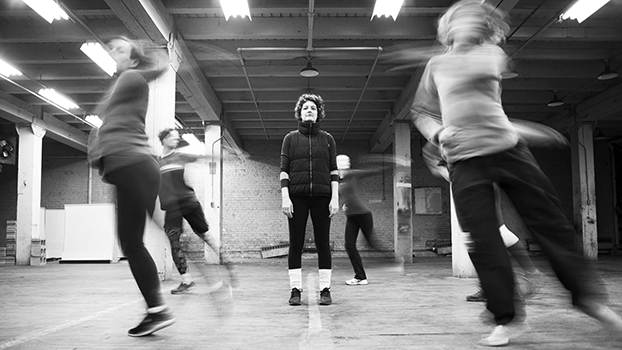 DOWAGIAC — Southwestern Michigan College is launching 2019 with “Holding Space,” a dance film series in the Art Gallery Jan. 7-31, with its director, Hannah Fischer, lecturing for the Academic Speaker Series on entrepreneurship.

Fischer’s free public talk takes place at 2 p.m. Thursday, Jan 17, in the theatre of the Dale A. Lyons Building on SMC’s Dowagiac campus. Her talk follows a morning student workshop and a 12:30 gallery reception.

Holding Space explores various forms of relationships between people, the impact we have on each others’ lives and our perception of the world around us.

Each film seeks to evoke emotion, develop character and tell a story within a five-minute time constraint, though “90 Years” features Fischer alone in a cavernous void, said SMC officials. Scenes unfold on an early-morning rooftop, in warehouses and amidst sand dunes and cornfields.

She created the series which premiered last March at LaSalle Body Shop in collaboration with Alyssa Neece of Corlanthum, director of photography — and now a New York cinematographer — and Patrick Quigley of Sailbear, composer.

Holding Space will be an “immersive installation of wall projections,” said Marc Dombrosky, SMC Department of Visual and Performing Arts chairman. “Visitors will have the experience of nomadic dance, moving through multiple sites and time frames as they navigate the gallery.

“She’s been a pivotal figure in the artistic revitalization of South Bend and is enthusiastic about discussing how a new venture — building a dance company like a start-up — emerges in this region. Her lecture will draw students equally from the School of Business, communications and VAPA.”

“With great training and support from college and St. Louis I was set up for success,” Fischer said. “Looking back, small steps tried to make decisions with the best information at hand. Small strategic decisions lead to broader, long-term success. I’m always multi-tasking and thinking ahead.”

Fischer arranged Holding Space in vignettes to create a sense of place while moving the audience forward quickly.

“Warehouses are just interesting spaces that represent the history of South Bend,” she said. “This reclaims these empty spaces.”

Upon graduating from St. Mary’s College in 2011, she moved to St. Louis to work for a dance company in non-profit arts administration, adding responsibilities until she became assistant director.

What she built in South Bend training dancers and cultivating a modern dance audience was rebranded last July as New Industry Dance. But “Fischer Dance” went west with her, continuing Feb. 13-17 at the World Dance Alliance-Americas 2019 General Assembly at the University of Texas at El Paso.

“Part of my vision is (Fischer Dance) is bigger than me, so it still exists,” she said. “I move on and take my branding, so more can come to the table as artists in South Bend.”