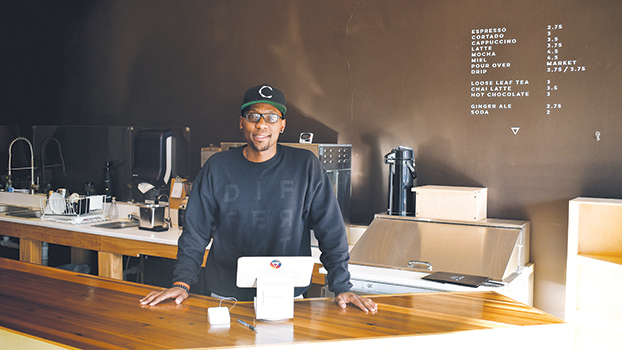 However, on Friday, the tantalizing smell of freshly brewed coffee hung heavy in the shop’s air once again. The scent is a testament to the new business that will soon open and entice customers with the same menu and Grand Rapids-based Madcap coffee.

Atomic Bean Coffee will host a soft opening at 7 a.m. Jan 21 at 205 E. Main St. Relevant Church will own the coffee shop.

Relevant Church pastor Muta Mwenya was among the locals saddened to hear that Top Heavy was closing its doors. Mwenya was a frequent customer of the shop and said he was determined to revive the space.

“I had a lot of meetings here and I drank a lot of coffee here,” Mwenya said. “I know there’s a lot of people who felt the same way, too.”

Mwenya will serve as the creative director of Atomic Bean Coffee. He said customers could expect to find the same menu. He also hired some of the former Top Heavy baristas to whip up the drinks. Tea and soft drinks will round out the menu. Between eight and 10 people will run the shop. Applications for full-time positions are still being sought.

While keeping the same beverages was important, Mwenya said customers would also notice some changes.

In February, Mwenya said they hope to offer a lunch menu. Adding to the atmosphere of the space is another important aim that Mwenya hopes customers will notice.

“The ambiance is going to shift a bit,” Mwenya said. “You may see some couches and much more comfortable seating that will allow people to sit longer and have much more social interaction.”

Mwenya said he hopes the business can serve as a gathering place for people to have meetings, study, meet clients or relax with their favorite cup of joe.

Top Heavy operated for about two years before business owners Eric and Wendy Halder closed the shop. They cited a lack of customer traffic as one of the reasons for the decision.

Mwenya said he has strategized to overcome this challenge. He said he hopes a better marketing campaign and extended business hours will bring more people to their door. Atomic Bean Coffee will be open seven days a week, including from 7 a.m. to 7 p.m. Monday to Thursday; 9 a.m. to 10 p.m. Saturday and 9 a.m. to 3 p.m. Sunday.

Mwenya also wants the shop to serve as a venue for local musicians. He said they intend to host regular live bands at Atomic Bean.

Mwenya emphasized that while his church plays a part in the operations, and will benefit from a portion of the proceeds, Atomic Bean is its own business. He said he hopes that the local coffee shop will fill a community need by providing a place for a fresh cup of coffee or tea, food and a place to gather.

“That’s kind of the vision of our church is to impact more than just the faith aspect of our community,” Mwenya said. “We want to bridge the gap in the community by creating more spaces for people to connect.”

During the Hunter Ice Festival, Atomic Bean will serve as a warming station. While the full bar will not be open at that time, people can drink hot chocolate and Mwenya hopes to offer a few drink samples to some “lucky” individuals.