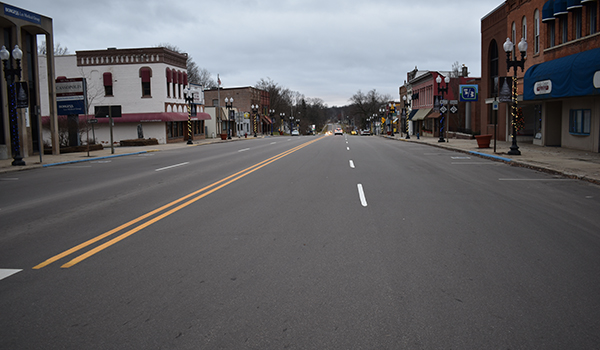 CASSOPOLIS — Big things are coming for downtown Cassopolis in 2019. Thursday, the Cassopolis Village Council held a special meeting to vote on several projects developed through the master plan and Imagine Cass project.

In the meeting, which village manager Emilie Sarratore and village president David Johnson said ran no longer than 10 or 15 minutes, the council unanimously approved all the major infrastructure and economic development projects the city administration brought forward.

Sarratore believes the approval of the projects is the biggest step forward for Cassopolis in many years.

“I give huge credit to council for taking a monumental step forward. It’s by far biggest investment into themselves and community they’ve ever made,” Sarratore said.

Village president David Johnson had similar sentiments. As a lifelong resident of Cassopolis, he has seen development project ideas come and go without beginning or completion. Johnson has long pointed to resources like Stone Lake as underutilized. The approval of such development projects is in many ways something he has waited much of his life to see.

A few of the major projects Cassopolis residents will see progress on in 2019 include a new municipal building that will house the administrative and governmental offices for Cassopolis, as well as the police department and DPW, a public recreational beach area off Disbrow Street, a boardwalk from Lakeshore Drive to the downtown area and the Broadway street scape project, which will involve redoing city sidewalks to slow traffic through the downtown corridor. Those changes, as well as others, will reshape Cassopolis and create a more desirable community for new businesses and residents, according to Sarratore.

“This will completely transform the downtown,” she said.

Johnson believes the projects are most beneficial for the people who already reside in Cassopolis.

“Without a vision this community will die. Young people have a vision, and with young people on the council they can show us what they want in the future for their families,” Johnson said.

Sarratore gave credit to the council for not only voting to invest in the community, but for hearing the needs of the community.

“The fact they took this step means they’re listening to what people are saying. They showed (Thursday night) that they listened, they planned and they’re ready to move forward with all this.”

Sarratore and Johnson were similarly pleased with the members of the community who stepped forward to contribute and participate in the Imagine Cass project, which showed Cassopolis’ desire to invest and grow.

“We were blown away by the numbers of people who came,” Johnson said. “I think it says that the people want something changed… I think people have been ready for change for a while.”

The next steps for the Village of Cassopolis will be to finalize plans and designs for the various projects. Sarratore expects breaking ground for the projects in early 2019, and expects the projects to be finished by late 2020, or early 2021.