Striegle and Renbarger’s courtship began when they were in the seventh and eighth grades in Buchanan.

Norm enlisted in the U.S. Army when he was just 18 years of age.  They were married on Dec. 29, 1948, at the Buchanan United Methodist Church parsonage while he was on leave from Fort Bragg, North Carolina. Norm honorably served his country in the U.S. Army for 20 years, taking the couple to Japan, Hawaii and Virginia to name just a few destinations.  After his retirement from the Army, he was a mail carrier for the Niles U.S. Post Office until his second retirement. Prior to her retirement, JoAnne worked at the Garden Gate Flower Shop in Buchanan for many years.  They currently reside in Niles.

Their families said they wished to celebrate their lifetime of commitment, love and faithfulness one to the other, showing them an example of what marriage should be.

“Thanks, Mom and Dad, for showing us the way,” Dawn said. “Happy 70th Anniversary!  We love you. [From] Lynne, Sherry and Dawn.” 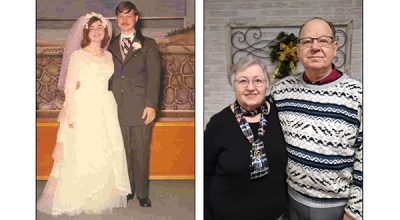