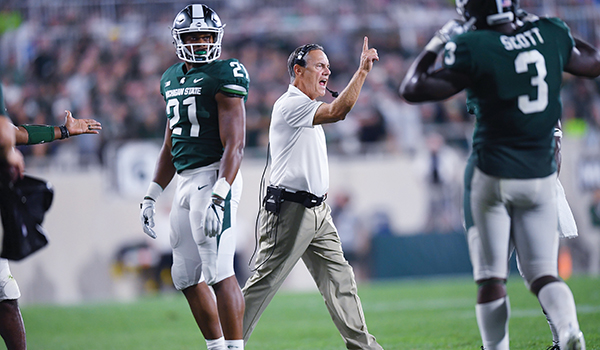 SAN FRANCISCO — The Spartans took full advantage of their first day in the Bay Area for the Redbox Bowl trip.

After a four-day holiday break, the team left on a charter flight from Lansing Wednesday at 9:30 a.m. and landed in Oakland at 11:15 a.m. PT.

Following check-in to team headquarters at the Hyatt Regency in Downtown San Francisco and some team meetings, the Spartans enjoyed the California sunshine with a late afternoon practice in Oakland. Under sunny skies and temperatures in the mid-50s, the Spartans worked out in shells for just over 90 minutes as they continued preparations for Oregon on New Year’s Eve.

By the time practice ended, the sun had set and the team had wrapped up a long but productive day.

“I thought we had a good day out here today,” said Michigan State head coach Mark Dantonio, who has led the Spartans to 11 bowl appearances in his 12 seasons in East Lansing. “We had a crisp practice with a lot of energy. We traveled well out here and we’re ready to go. We were out here for about an hour and 40 (minutes). We had meetings and everything else, so we worked basically from 2:30 to 6 p.m. (PT). Good energy, up tempo, very positive attitude, and good leadership.

“The focus is on beating Oregon. So everything we can do from a practice standpoint to get ready for that, that’s sort of where we’re at. We have four more practices out here. These next two (Thursday, Friday) will be harder, but that’s the focus.”

After practicing inside the Duffy Daugherty Building the past few weeks while getting ready for Oregon, the Spartans enjoyed being outside on Wednesday.

“It’s beautiful out here,” said Dantonio. “The sun was shining and it was about 60 degrees, so it’s a little bit of a change for them. We got outside and got after it, so it was a good change of pace.”

The Spartans will hold an afternoon practice on Thursday before attending the Golden State Warriors game at Oracle Arena at night.

MSU (7-5) will take on Oregon (8-4) in the Redbox Bowl at noon on Monday in Levi’s Stadium. The game will be televised nationally on FOX.