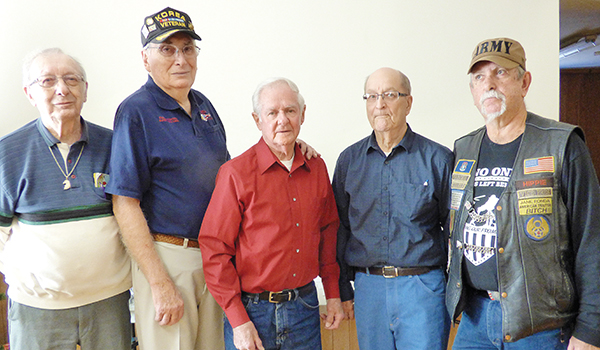 Veterans, friends and family gathered at the Buchanan American Legion earlier this month for the Papasan Mamasan Korean Veterans’ annual Christmas get-together and to celebrate a milestone anniversary. The organization formed 25 years ago in Buchanan to honor and serve Korean War veterans.

Buchanan residents Walter Jane and Paul Daniels formed the Papasan Mamasan group in 1993. The organization initially had 262 members, a number that has dwindled to 140 now.

An average of 20 or so veterans currently attend the monthly meetings. While the Christmas gathering always takes place in Buchanan, other meetings during the year occur on the third Saturday of each month at American Legion, VFW and other military-related posts in Berrien County and surrounding areas.

For members, the monthly meetings and the Christmas gathering offer them the chance to see old friends and reminisce about their wartime service. Sessions often feature presentations about veterans’ programs as well as fun activities like bingo and raffle giveaways.

Niles area resident Dee Wilson serves as the organization’s secretary. He was a Marine medic during the war.

“It’s a social group and a chance to get together and talk about the old days,” he said. “Our guys are 85 and older. We lost five members just this year.”

He noted that the veterans of the major 20th Century wars are all getting older and, unfortunately, dying.

“World War II veterans are 95 or older and Vietnam veterans are 70 years old or more,” he said. “We’re a dying breed. Ours was the forgotten war, we were at the tail end of the Greatest Generation. Korea was a police action and then a conflict and finally a war.”

Wilson continues to keep the history he experienced alive.

“I put on a presentation at a local school every November for Veterans Day, and the students have no idea what I’m talking about,” he said. “They look at me like I’m a dinosaur.”

Veteran and organization publicity chair Don Holmes said he still thinks about his wartime service and time in Korea these many decades later. After arriving in Korea, he was assigned to be a clerk for a company of combat engineers. He lives in Buchanan and is now 91 years old.

His wartime experiences include living through enemy attacks on their base and speaking up for the Korean youth who served them.

“They came to me upset that a master sergeant had kicked them out of the chow line,” he said. “I chewed out the sergeant and got away with it”

“Three weeks later he had his hand blown off, and he yelled at me when he saw me. That shook me up. Months later when I was back stateside, I saw him in a bar. He called me over and apologized. I consider that my miracle that I met him again.”

Organization treasurer Harold Wagner of Niles served in Korea right after the war. He was drafted when he was 21 and arrived in Korea after the armistice.

“It’s nice to get together. I enjoy the company every month,” he said. “We’re losing so many of our people.”