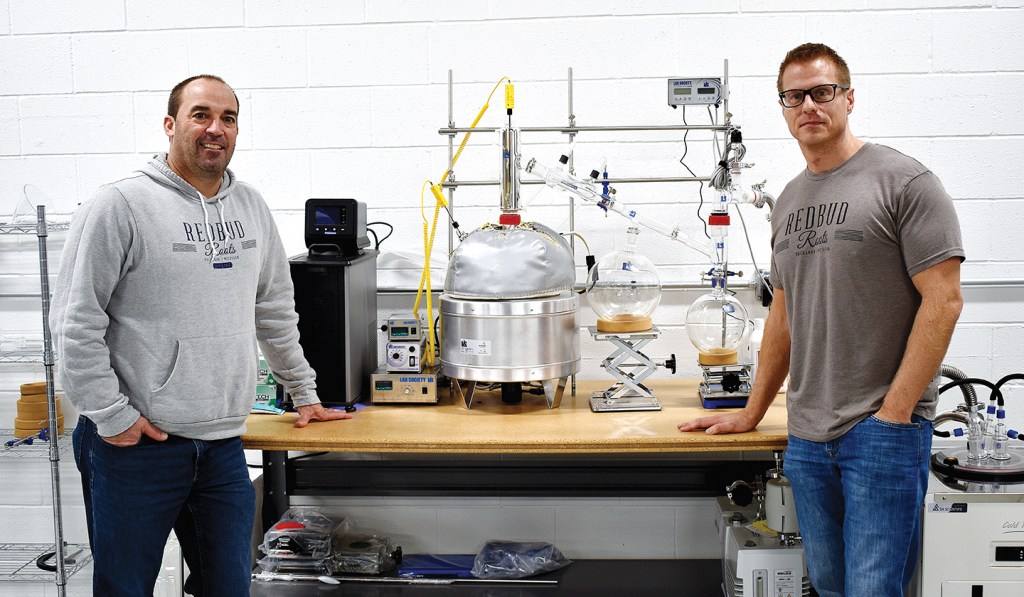 “We spent so much time getting to the starting line,” Murray said. “Now we get to run the race.”

The business is the sixth grow facility in the state to receive a medical marijuana license and the first in southwest Michigan, according to Redbud.

Redbud Roots has property at 448, 215, 208 and 206 Post Road in Buchanan. They will function as a vertically integrated company, growing and processing marijuana for medical card holders.

The business owners received two Class C licenses to grow 3,000 plants at 448 Post Road. They also earned a processing license from the state.

With the licenses obtained, plants are already in the ground at their grow facility at 448 Post Road. At 215 Post Road, Redbud will operate a processing lab to make marijuana products, such as vape cartridges — a concentrated oil that is placed inside a vape pen. They will also produce tinctures — a mouth spray — topical creams, and edibles. The business owners said they hope to have their first product ready by mid-January. The property at 215 will also serve as corporate headquarters.

In April 2019, the company expects to go back to the state and obtain more licenses to complete other phases of their business.

While the process to obtain state licenses might have felt like a lengthy one, Murray said he thought it was warranted.

“I think that overall they [the state] did a good job,” Murray said. “You are essentially starting a new industry and a new sector of government, so there is a huge learning curve for all involved. I’m happy that they were as strict with the procedure.”

He said the process is intended to provide licenses to businesses that will give the industry a good reputation.

Besides having the opportunity to start their business, Redbud Roots owners said they are excited for the future of medical marijuana in the state of Michigan.

“We got into it to show everyone out there what the benefits and capabilities of this plant are,” Murray said. “We want to research new developing ways to grow cannabis. We want to find new ways to get into the medical industry. We want to find ways it can fight opioid addiction, anxiety, sleep apnea [and] seizures.”

Murray is hoping Redbud can play a role in that future. He expects 215 to take part in research and development efforts and connect with universities and nonprofits looking to study the plant further.

“Because of its federally illegal restrictions on cannabis, there’s no FDA research that has been done in the last 80 years,” Murray said.

When asked what role they see the recent legalization of recreational marijuana playing in their business, Murray said, at this time, the company is focused on medical marijuana.

“They still need to write the recreational laws,” Finley said. “Until they are written and we can read them and see them, we don’t know really know the impact yet. From day one, we have focused on the medical side of this.”

Redbud invested about $3.5 million in the Buchanan buildings. With some construction expected on their other operations, including building a brand-new facility at 208, the company plans to invest a total of $12 million by the end of 2019.

As they look to the future of doing business in Buchanan, Murray and Finley said they hope to be good neighbors and contributors to the community. Redbud is expecting to hire about 75 to 100 people in the next two years.

Additionally, Murray and Finley said they have donated to the Buchanan Chamber of Commerce and Thrill on the Hill.

“We want to give back,” Finley said.

Those looking to learn more about Redbud Roots can visit their website at redbudroots.com.