DOWAGIAC — Monday, six students at Dowagiac Union Schools were able to shake the hands of the board of education members, as they were recognized for their efforts and impact within the school.

Announced by Principal Kelly Millin, sophomore Kimi Beattie was chosen as student of the month for Dowagiac Union High School. She was nominated by Jeff Olson, her jobs for Michigan graduates teacher.

“Kimi is a hardworking and accomplished student,” Olson said in a written statement. “She is always looking to challenge herself and her sister classmates who are struggling. She has earned the respect of her peers and teachers alike. … Kimi is an ideal choice for student of the month, not only for what she has accomplished but for her positive attitude and strong work ethic. She is everything Dowagiac Union High School Chieftains stand for.”

Sixth-grader Kirsha Hubbard was chosen as student of the month for Dowagiac Middle School. Teacher Wendy VanPeteghem nominated her.

“She is a very hard worker and is always willing to participate in class,” VanPetegham wrote about Hubbard. “Kirsha is friendly to all her peers regardless of who they are. She always has a smile on her face. Kirsha is very helpful towards others, and she shows compassion and just complete kindness with all people every day. She goes above and beyond our hero expectations.”

“I nominated Madelynn for so many reasons,” Turner said. “First off, she is very intelligent, always a hard worker. She comes to class every day bringing her best and wants to help her classmates do the best they can. She comes in with a smile. … I can’t say enough about her. She is exactly what we want as a Justus Gage hero.”

From Kincheloe Elementary, third-grader Jenna Bradford was chosen. She was nominated by teacher John Laraway.

“I have the pleasure of teaching Jenna Bradford,” Laraway said. “Jenna is a great role model for all students. She is a friend to all, always has a smile on her face and never has a negative word to say. These qualities will make Jenna very successful in life.”

“This is one of the best students right here,” Zietlow said. “She is helpful 100 percent of the time. … She is a hard worker who always wants to do well and enjoys helping others.”

Third-grader Taylor Sandeen was chosen as student of the month for Sister Lakes Elementary. Though Sandeen, who is new to Sister Lakes this year, was announced by principal Mike Campbell, she was nominated by her teacher, Kimberly Borlin. In a written statement, Borlin said that Sandeen “was an awesome and great addition to our classroom.”

“She is a Sister Lakes superstar,” Campbell said Monday. “Congratulations.” 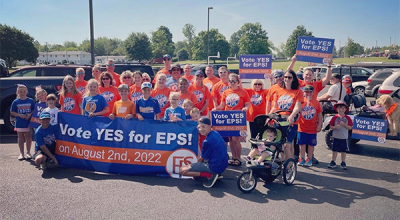