MHSAA announces return of Battle of the Fans 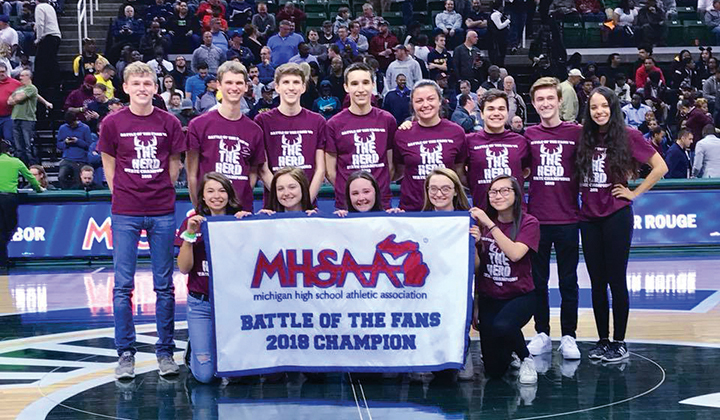 Buchanan’s The Herd are the defending Battle of the Fans champions. The Bucks also won the title in 2012-13. (Leader photo/File)

EAST LANSING — The Michigan High School Athletic Association’s Student Advisory Council will host its eighth “Battle of the Fans” contest this winter to award the top high school student cheering section in Michigan, again following an expanded format created a year ago that allows for nine contenders to pursue the championship over multiple rounds of competition.

Buchanan was named last year’s champion and presented with a banner during the MHSAA boys basketball finals at Michigan State University’s Breslin Center.

Schools are invited to submit a short video, via YouTube, of their cheering sections in action at a school sporting event. Video submissions should be between 90 seconds and three minutes long and explain how that section meets the following contest criteria: positive sportsmanship, student body participation, school spirit, originality of cheers, organization of the group, student section leadership and fun.

The deadline for student-submitted video applications is noon Jan. 12. Nine semifinalists then will be chosen — three each from Class A, Class B and Class C/D — to partake in a two-week challenge where each will be required to complete 10 tasks, further showing why they should be chosen as Michigan’s best student section. From those nine, three finalists then will be selected by the Student Advisory Council and visited on a home game night by MHSAA staff and Advisory Council representatives. The MHSAA will produce a video of that finalist after each visit, with the champion being selected by the Student Advisory Council based in part on support each section receives on the MHSAA’s social media sites.

This year’s Battle of the Fans VIII winner will be announced Feb. 22 and recognized March 15 at the Breslin Center.

“We’re excited to begin our second year of Battle of the Fans with this expanded format that allows us to keep more schools participating longer — and see them participating in various challenges instead of just during one visit like in the first years of the contest,” said Andy Frushour, MHSAA director of brand management and advisor to the Student Advisory Council. “Adding the challenge round last year created more excitement as more schools were competing later in the contest — and their work in those challenges provided us many more examples to share in showing students how much fun can be had cheering for their teams in a positive way.”

Rules, directions for submitting videos, plus links to coverage of finalists from the first seven years of the contest can be found on the MHSAA Website at mhsaa.com/BOTF. This year’s finalist videos, plus the announcement of the 2018-19 winner, will be published on the MHSAA Second Half site at SecondHalf.MHSAA.com.

The Student Advisory Council is made up of eight seniors and eight juniors who each serve two-year terms. The Council acts as the voice of Michigan’s student-athletes; it serves as a student sounding board for the MHSAA’s Representative Council, assists in planning Sportsmanship Summits, Captains Clinics and other student leadership events; participates in a yearly focus group about the state of high school sports for Michigan State University’s Institute for the Study of Youth Sports and assists with medal ceremonies at MHSAA championship events.