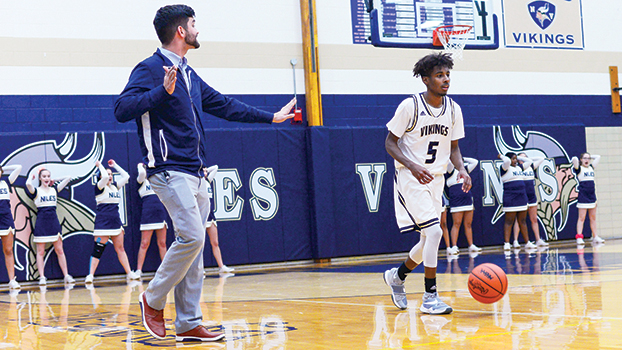 The Viking girls team dropped a 51-33 decision to Portage Central, while the boys team was edged by the Mustangs 59-57.

Alycia Patterson had 15 points and sister Kamaryn Patterson added seven in the loss to the Mustangs.

Niles trailed 16-3 after one quarter and were never able to overcome the early deficit.

Portage Central led 30-14 at halftime and 41-17 heading into the final quarter.

The Vikings are back in action tonight as they travel to Buchanan for a non-conference game with the Bucks.

Despite outscoring Portage Central 24-21 in the final eight minutes of play Friday night, visiting Niles came up a basket short against the Mustangs.

Niles trailed 21-15 at halftime, but cut the lead to 38-33 heading into the fourth quarter.

“We had a tough first quarter,” said Niles coach Tyler Dendy. “Six out of our first seven possessions resulted in turnovers which led to a 13-5 deficit. I am so proud of this group for their fight. We only dressed six players and won three out of the four quarters tonight. The next step is cleaning up our mistakes and putting four quarters of quality basketball together.”