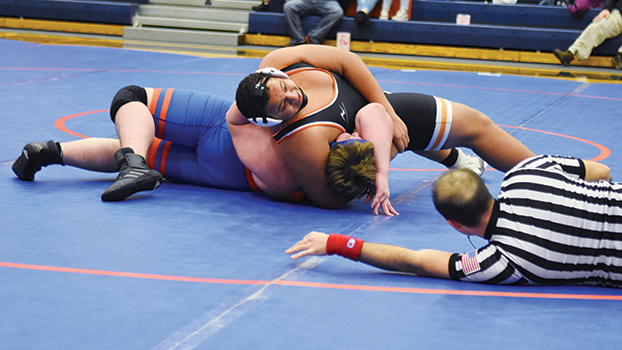 “We wrestled well for third time out,” said Niles coach Todd Hesson. “Despite the score, St. Joseph is much improved. Their staff has done an excellent job.”

The Vikings were able to take advantage of its power with seven pins, a forfeit victory and a major decision.

Cole Simpson picked up the forfeit at 160, while Cade Best won by major decision over Drake Collins (12-4) at 171 pounds.

“Cade Best just got ranked this week and first time out wrestled a ranked kid from St. Joe,” Hesson said. “He did a great  job. He had a solid plan and managed the match well. Cade has worked hard and has excellent technique.”

Hesson was pleased with the efforts of Jamison Zimmerman and Custard.

“Jamison had a solid match,” he said. “He wrestled up a weight class and again stuck to a solid game plan. Tyson Custard has worked his way into a starting spot and has got more mat time and had a big pin at 215.”

Despite the 2-0 record and a tournament victory at Lansing Eastern last Saturday, Hesson and his staff know there is work to be done.

“We still have a long way to go, but we are trying to get healthy and get kids to the right weight class. Over the next two weeks we will travel to the Penn and Eaton Rapids super duals. Hopefully we will learn to compete with some very tough competition.”

Niles travels to Mishawaka for the Penn Super Duals on Saturday.

EDWARDSBURG — Experience down the stretch proved to be the difference between Dowagiac and host Edwardsburg in their Wolverine Conference match Wednesday night.

The Chieftains led 30-22 with three bouts remaining after Korey Kinyon of Dowagiac pinned the Eddies’ Kaden Parson in 3:34 at 125 pounds.

Edwardsburg, the defending conference champion, won the final three bouts to pull out the 36-30 victory over the Chieftains in an early test for both teams.

Jackson Hoover completed the comeback with a technical fall (19-3) over Seth Ward at 140 pounds.

The Tinkham pin was the only one of the night for Edwardsburg, which did record two technical falls and a pair of major decisions. Jacob Reece opened the match for Edwardsburg by receiving a pin.