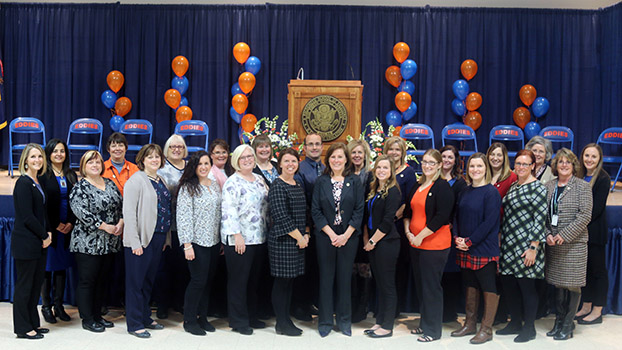 EDWARDSBURG — In October, Edwardsburg superintendent James Knoll received a press release from the U.S. Department of Education announcing education secretary Betsy DeVos’ 2018 Blue Ribbon Schools. Edwardsburg’s own Eagle Lake Elementary was one of 349 schools to receive the designation for its high scores based on the Michigan Student Test of Educational Progress.

Last Thursday, an award ceremony was held in the afternoon at Eagle Lake Elementary for a community commemoration for receiving the national designation, and an open house was held in the evening so community members could see the nationally recognized school up close. Schools are awarded the Blue Ribbon School designation based on exemplary high performance based on state standards, or exemplary achievement in closing gaps between high and low achieving students.

Although Eagle Lake received the Blue Ribbon recognition, Knoll attributes just as much of the success to Edwardsburg Primary School, the district’s K-1 school, for preparing the students who moved on to Eagle Lake. Meeting an individual student’s educational needs is a high priority in Edwardsburg, according to Knoll. For students who are advanced in their reading levels, mathematical skills and other areas, teachers plan to keep them progressing at an accelerated rate. For students who may be behind the standards for their grade, teachers plan to raise them to the appropriate standard. Knoll believes that strategy has worked well for K-3 in Edwardsburg.

“Our game plan has always been to work with students where they are,” Knoll said. “We will continue to work individually with students.”

In the last 15 years, every building within the Edwardsburg district has received the Blue Ribbon recognition either at the state or national level, according to Knoll. Any year a school within the district receives the recognition is reason for the whole district to celebrate.

“The biggest reward for this is its recognition of high performance of the students and the work instructors and staff have done to attain that award. You get to say you’re part of small number of schools that can say they’re national Blue Ribbon Schools,” Knoll said.

As a result of the recognition from the U.S. Department of Education, superintendent Knoll, Eagle Lake principal Deborah Becraft and Erika Bolig from the Michigan Department of Education visited Washington D.C. in early November to hear not only from education secretary DeVos, but to hear from educators from other Blue Ribbon Schools. The trio spent a couple of days in seminars hearing from educators and administrators, as well as sharing their own stories, strategies and successes from Edwardsburg.

The Blue Ribbon plaque and flag will be displayed in Eagle Lake Elementary near the office. For all of the ceremonies, though, the real reward is the pride of the Edwardsburg district.

“For a district, this means we can look at and point to Edwardsburg Public Schools and say, ‘We’re special.’ We try to do and say everything with pride, passion and purpose so we have excellence everywhere,” Knoll said.