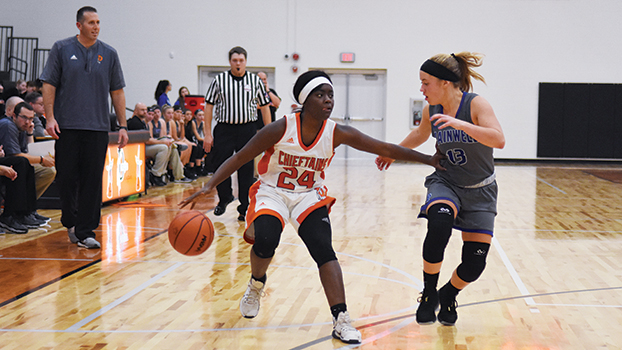 Dowagiac’s Kazmere Williams looks for a lane to drive to the basket in the Chieftains’ 55-32 loss to Plainwell Tuesday night. (Leader photo/SCOTT NOVAK)

The Chieftains had just cut the lead to 24-20 with less than four minutes to play in the second quarter.

Plainwell was able to take advantage of back-to-back defensive lapses to push its lead to 28-20. The Trojans outscored the Chieftains 8-2 in the closing moments of the first half to take a 32-22 lead into the locker room.

Those defensive lapses led to a 55-32 Wolverine Conference non-divisional loss for the Chieftains, who drop to 1-2 on the season.

Plainwell, which went on to outscore Dowagiac 23-10 in the second half, improved to 3-0 on the year.

“We had it down to four (points) and we had two straight defensive breakdowns and ended up being down 10 at halftime,” said Dowagiac coach Brent Nate. “They were expecting to win. We were wanting to win, hoping to win. We are still in a position of being unsure if we can win.”

Allie Conner scored a game-high 14 points to lead Dowagiac, which also got eight points from Kazmere Williams and five points from Kellyn Daly.

The visiting Chieftains were outscored 29-26 in the second half of their 49-46 Wolverine Conference non-divisional loss to Plainwell Tuesday night.

Plainwell took a 36-35 lead into the final quarter and then held off the Chieftains.