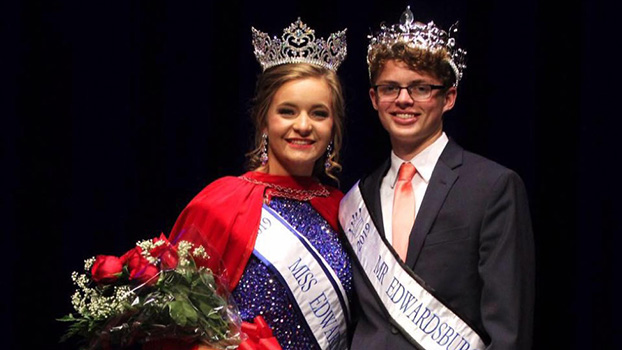 EDWARDSBURG — Glittering dresses and smiles were met with glimmering crowns Saturday, as the 2019 Miss Edwardsburg court was announced. The 2018 court returned crown their successors with the same community pride of Edwardsburg that graced their own heads and hearts the previous year.

Carlee Burger was crowned with the title of Miss Edwardsburg, and Cody Adkins retained his title of Mr. Edwardsburg from the previous court. For Burger, the crowning was a pinnacle in a long pageant career. Burger has participated in pageants for several years, and was previously crowned princess in 2009, and Miss Teen Edwardsburg in 2017.

“I’ve been waiting for this since I was little. I can’t wait to represent my community in Blossomtime,” Burger said.

According to Burger, the most important part of being on the Miss Edwardsburg court is giving back to the community.

“I just want to develop youth in community, be more involved with kids, and be really beneficial to younger ages,” she said.

“It’s truly amazing. To share this with my little sister is pretty great,” Burger said. “She should be proud of her position. I want her to be a role model like I am now.”

Carlee and Paige’s mom, Kim Burger, was likewise honored by the momentous occasion.

“It’s going to be a fun year with both of them on the court,” Kim said. “Paige was growing up with Carlee doing the program. Learning those skills from her older sister has helped her along the way.”

Mr. Edwardsburg, Cody Adkins, is pleased to have a second opportunity on the court.

“I feel honored to represent not one, but two Edwardsburg courts,” Adkins said. “I feel I’ve developed in last couple of years, and next year will help me develop even better.”

Burger and Adkins will go on to represent Edwardsburg during the Miss and Mr. Blossomtime 2019 pageants, which will take place Sunday, March 10, and Monday, March 11, at the Mendel Center in Benton Harbor.  Tickets are available by contacting Kim Burger, Carlee Burger, Dwayne Adkins, Cody Adkins, or Chairwoman Tammy Boyer through the Facebook page, or by emailing missedwardsburgpageant@gmail.com.