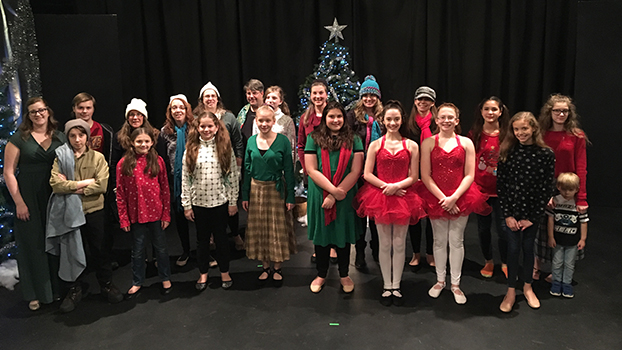 EDWARDSBURG — Friday through Sunday, Barn Swallow Theater will present a Christmas show for the Edwardsburg community. The three-day show series will feature local performers of all ages, seasonal songs from favorite holiday shows and the Christmas cheer of a community.

Smith has directed three shows at Barn Swallow, which included the 2017 Christmas presentation of “A Charlie Brown Christmas.” The 2018 show will feature some of the Charlie Brown tunes, as well as the famous Linus monologue, but will also feature music from “White Christmas,” as well as other favorite holiday songs. Many of the arrangements include choreography, featuring students like Lilly Podjan, a 7th grade ballet dancer.

“I like my friends, and I like the songs we do,” Podjan said about participating in the show. “I think (the audience) will enjoy it because it’s a fun experience.”

In preparing for the Christmas show, Smith wanted to make the presentation as family friendly and inclusive as possible. Not only is the show appropriate for all ages and families, it also features families like Elizabeth Babler’s. Babler is a dancer in the show.

“Most of my family is in it, so we’re just having a lot of fun doing it as a family,” Babler said.

Smith has performed in various productions since she was child. Now a 28-year-old mother, she remembers her childhood performances fondly, especially those she participated in with her own family members.

“Christmas is all about family. With this show, I wanted families to be able to come out and participate together,” Smith said.

The Barn Swallow Theater has been around as a community theater outlet since the 1980s. In recent years, however, the theater has been an intriguing internet find for various performers, like Smith and Podjan, who both found the theater online. Smith is from the South Bend area, but was looking for a theater, performing, and directing outlet. Podjan currently does not perform outside of Barn Swallow, but hopes to go on to perform on Broadway. Babler is in her second show with the community theater, and is pleased with the comradery and inclusivity, as well as the results of the Barn Swallow productions.

“It brings about that joyful feeling around the holidays,” Babler said.