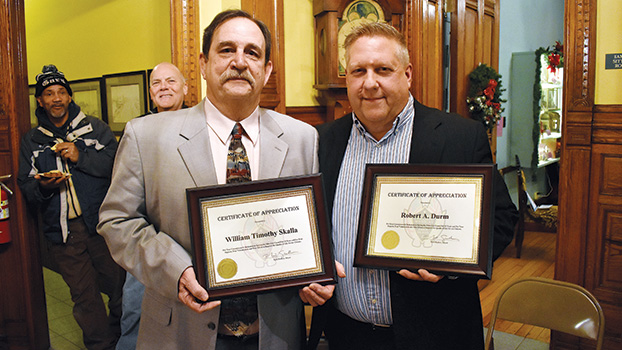 From left, retired council members Tim Skalla and Bob Durm hold the Certificates of Appreciation they were awarded Thursday for serving the city. (Leader photo/KELSEY HAMMON)

The community was invited to attend the event and thank the council members for their service to the city.

Both Durm and Skalla retired from their longtime roles on the city council after defeats in the midterm election. Skalla served the 4th Ward for 12 years, while Durm served as a 2nd Ward councilmember for 23 years. He also recently held the position of mayor pro tem.

Before receiving their awards, those who worked with the council members said a few words on their behalf.

Former Niles Mayor Mike McCauslin attended the reception and commended Durm and Skalla for their efforts to better the city of Niles.

“I want to share with you that these gentlemen have served the city well,” McCauslin said. “They have kept the citizens’ interest at heart in all of their decisions.”

Mayor Nick Shelton also recognized Durm and Skalla for providing him with guidance as a new mayor. Shelton said he and Skalla had spent hours at a time on the phone discussing city issues.

“Tim is one of the most passionate Niles citizens I know,” Shelton said. “He cares so much about the history of our city and I have always admired that.”

Shelton also recognized Durm, who squared off against Shelton in the race for mayor two years ago.

“Bob is a fierce competitor,” Shelton said. “Bob and I have not always seen eye to eye, but I really respect everything you have done for our city.”

During city council meetings, Shelton said Durm had also demonstrated a true passion for Niles and its residents and helped to serve as an example to others.

During his tenure on city council, Durm was involved in a variety of projects that changed Niles’ economic landscape. He deliberated approvals needed for the Niles District Library’s major expansion and was also involved during the construction of Parkview Apartments, the Brentwood Assisted Living complex and the Downtown Revitalization Project, to name a few. Among the recent developments, Durm was among those to work with Indeck officials to set the path for a Niles energy facility. The plant is slated to break ground early next year.

During his time as a council member, Skalla often demonstrated his passion for preserving and sharing Niles history. He was among the city leaders who helped to negotiate a partnership with Western Michigan University to establish an archaeology dig site and open house at the Fort St. Joseph. He also saw to the updates to Plym Park, the Wastewater Treatment Plant’s capital improvement project and recent purchase of the former post office building, which is scheduled to be turned into work force housing apartments.

Skalla his wife Candice are known for their volunteer work and helped to create the Friends of the Silverbrook Cemetery, an organization that maintains an online database for those laid to rest in the cemetery and helps to maintain the historic grounds.

Skalla was replaced by Jessica Nelson and Durm by Travis Timm. Both new council members were sworn in Nov. 26.