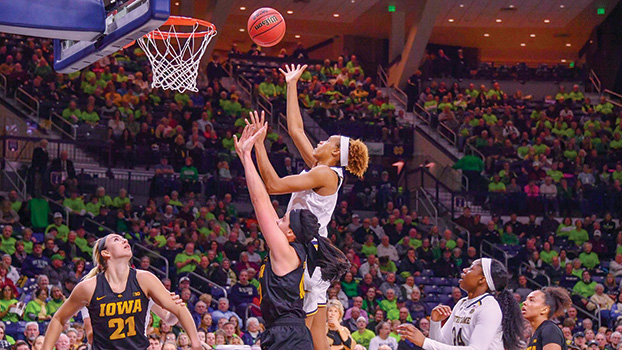 Notre Dame’s Brianna Turner is up for another award. (Leader photo/Submitted)

OVERLAND PARK, Kan. — University of Notre Dame women’s basketball standout Brianna Turner was selected as one of 30 candidates up for the 2019 Senior CLASS award.

An acronym for Celebrating Loyalty and Achievement for Staying in School, the Senior CLASS Award focuses on the total student-athlete and encourages students to use their platform in athletics to make a positive impact as leaders in their communities.

To be eligible for the award, a student-athlete must be classified as an NCAA Division I senior and have notable achievements in four areas of excellence: classroom, community, character and competition.

Turner earned her bachelor’s degree in design in May 2018 with a cumulative GPA of 3.138 and major GPA of 3.433. Turner also studied abroad in South Africa for three weeks during the summer of 2016. There, she learned about the culture of the country and also examined the cultural, historical and social psychological effects of racism and apartheid in South Africa.

Turner has volunteered at Oaklawn Children’s Campus working with preteen boys, while mentoring a young girl. Oaklawn’s programs are designed to support youth in developing healthy coping skills so they can return to and live successfully in their community. Turner has volunteered once a week, only missing when basketball travel interfered.

On the court, Turner is one of just three players all-time at Notre Dame to be at least a three-time AP All-American.

The candidates will be narrowed to two fields of 10 finalists in February, and those names will be placed on the official ballot. Ballots will be distributed through a nationwide voting system to media, coaches and fans.

The Senior CLASS Award winners will be announced during the 2019 NCAA Women’s Final Four.