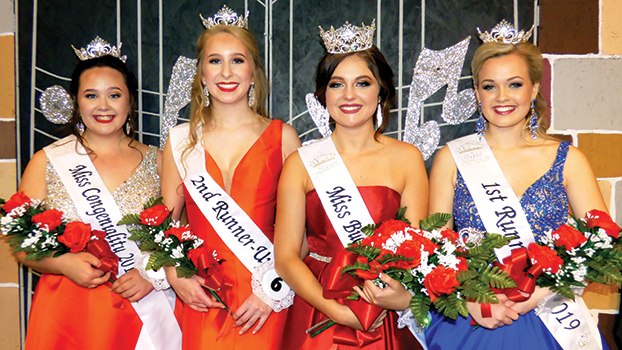 “I’m shocked but completely utterly grateful,” Emily said after the contest, where she competed against 13 other girls. “This is the first contest I’ve ever entered. I wanted to put myself out more.”

The new queen will now compete with other community queens for the Miss Blossomtime title March 10 to 11 at Lake Michigan College’s Mendel Center. This year’s Blossomtime theme is “America, The Places You’ll Go” and the Miss Buchanan committee chose “Let’s Visit Tennessee, the Volunteer State” for its theme.

Emily, 17, is the daughter of Eric and Sherry Riley. She is 5 foot 5 inches tall, has brown hair and blue eyes. For the contest, she wore a strapless red gown with full skirt and silver belt.

She plans to attend Southwestern Michigan College to study nursing. She hopes to become a labor and delivery nurse after graduating from college.

The new queen’s school and community activities include the Herd, Youth Advisory Council, cross country, softball and yearbook. She previously was on the basketball team and Spanish Club. Her honors include honor roll, academic letter and cross country most valuable player.

Maya Schuhknecht, 18, was chosen First Runner-Up in the contest. She is the daughter of Michael and Jennifer Schuhknecht. She plans to attend Michigan State University to study graphic design and advertising.

Megan Adkerson, 17, was chosen Second Runner-Up in the contest. She is the daughter of JT and Becky Adkerson. She plans to attend Lake Michigan College to major in secondary education. Her school activities include National Honor Society, volleyball and Project Close-Up.

Aria Nowlin, 17, was chosen Miss Congeniality by her fellow contestants. She is the daughter of Jason and Shailah Nowlin and plans to attend Grand Valley State University to major in special education and psychology. Her school activities include National Honor Society, Student Council, the Herd and Spanish Club.

Judges for the contest were Patty Booth, Leanne Rakowski and Tracy Urbanski. Marie Summers was the pageant director. John Colip was the master of ceremonies.