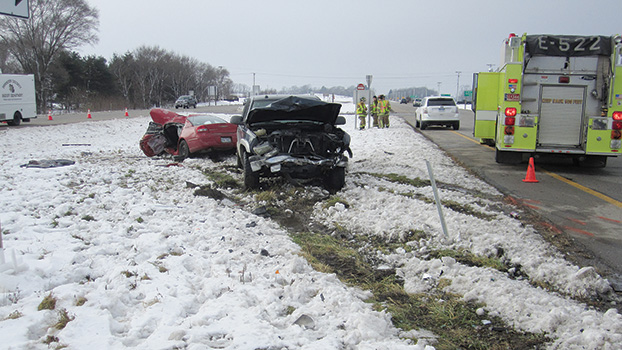 A wrecked Chrysler Sebring and pickup truck involved in a Thursday morning accident on U.S. 12 are pictured. (Submitted photo)

According to police, the accident occurred when a pickup truck driven by 39-year-old Thomas Doyle, of South Bend, was headed west on U.S. 12 and struck a vehicle that had just ramped off of US 31 Bypass southbound.

The southbound vehicle, a Chrysler Sebring, was driven by An-na Kim. Her vehicle was hit in the driver’s door. Both vehicles came to rest in the median. Kim suffered fatal injuries in the crash.

Kim is a graduate of Andrews University in Berrien Springs and is originally from Korea. She was in an internship with the Grand Rapids Symphony. Deputies were able to make notification to her father and sister in Korea with the assistance of the Andrews University Police Department and a Korean interpreter. Berrien County crash investigators believe that Kim may have pulled out into the path of the pickup truck.

The crash is still under investigation. Police said drugs and alcohol do not appear to be factors in this crash.