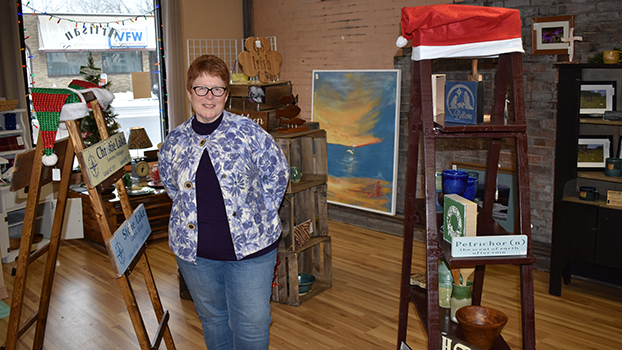 CASSOPOLIS — Saturday, Dec. 1, Deb Conley will turn on the lights, flip the open sign, and open the doors to her new art store, The Artisan Shoppe, in downtown Cassopolis. Located in the main stretch of town, on Broadway Street next door to Fifth Third Bank, Conley’s art store features handcrafted items such as jewelry, knives, paintings, decorations, body care items, and more.

Conley is a former hospice massage therapist from Berrien Center. While working as a massage therapist, she encountered a patient who owned an artisan consignment shop in Indiana. The idea stuck with Conley, and as she transitioned out of message therapy she began thinking about another endeavor to pursue. Opening an artisan store was the project she chose.

Logistics fell into place for Conley’s project and business venture. She found an open store front through Wendy Dyes, and quickly began searching for local artisans to fill her store front.

Conley found what she was looking for. Save for two artisans from Indiana, all of the items in her store come from the hands of southwest Michiganders. The Artisan Shoppe features works from 12 artisans in total, though Conley has more coming.

In the shop visitors will find signs with pithy phrases for home décor, necklaces made with repurposed silverware handles, knives with handles made from polished deer antlers, lamps constructed with old tin pails, and an array of other clever, handmade knickknacks. Conley hopes to find more body products and stained-glass items. The cost of placing items in the store is $20 a month, with 30 percent commission.

While Conley is excited that her idea finally came to life, she is also pleased to be a part of what she believes is a reawakening for Cassopolis, and Michigan small towns in general.

“I have watched as big box stores have edged out small businesses. I think we can start a trend to move back toward small business,” Conley said. “I’m hoping businesses are starting to come here.”

The soft opening of The Artisan Shoppe took place on Small Business Saturday, the Saturday following Black Friday. Cassopolis, however, does not have many small storefront businesses to choose from. Conley believes she is on the front end of a change in Cassopolis. She believes projects like Imagine Cass and Michigan Main Street are good steps toward rejuvenating the Cassopolis downtown.

“I think if we can get funding and plans enacted (the programs) will be good,” Conley said. “I’ll be on the ground floor of new development.”

Opening her business in Cassopolis has its perks, Conley explained. She thinks Cassopolis’ downtown is cute and quaint, and she likes the traffic going through town.

“There are a lot of people coming through here. We just have to get them to stop here,” Conley said.