Dowagiac artist to have opening at Euphoric Stage 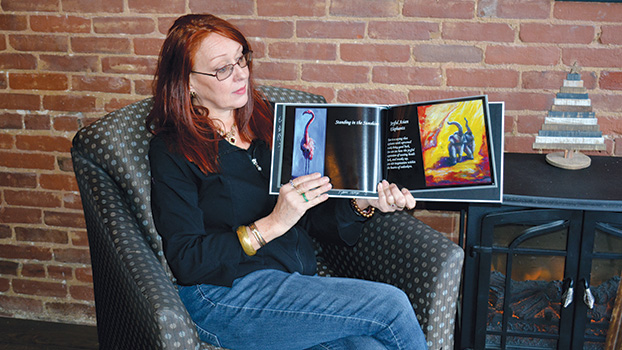 Sharron Ott poses for a photo with her new book “Celebrating Their Beauty.” Her works will be displayed at an opening on Dec. 7 at Euphoric Stage in Niles. (Leader photo/SARAH CULTON)

NILES — Next week, a Dowagiac artist will be taking her art to neighboring Niles to showcase her work.

Euphoric Stage, located at 1011 Broadway St., Suite #7 in Niles, will host an art opening from 5 to 8 p.m. on Friday, Dec. 7. The opening, for the exhibition “A Cheetah’s Soul,” will feature the works of Dowagiac artist Sharron Ott. The opening event will kick off the exhibition, which will be displayed at Euphoric Stage until Jan. 11. The opening is free and open to the public. Wine and hors d’ oevers will be served at the event.

Ott said openings are important events, as they serve as a networking platform and also as an essential building block for a fine arts community.

“[An opening] is a time to celebrate and have fun. It is also a time when an artist meets their audience,” Ott said. “After probably hundreds of hours of work, they take their message to the world in the form of painting, sculpture or other mediums. This is a very important moment in the career of that professional. Business owners, patrons and creators come together at these events, gathering up a plate of food and tasty beverages, while walking around the room viewing and conversing.”

The opening will serve as the first opening to be hosted at Euphoric Stage, and owner Alicia Koch said she is excited for the event.

“This is going to be a very elegant event,” she said.

Ott’s opening is the first of many planned for Euphoric Stage, with Koch saying that she is planning to display one artist per month.

Ott’s exhibition features a series about mostly endangered species with the goal of raising awareness of the animals and their disappearing habitats, she said. The title piece, “The Cheetah’s Soul,” will be formally shown for the first time at the Dec. 7 opening.

At the opening, Ott will also be presenting her new book “Celebrating Their Beauty,” a coffee table book which showcases the paintings with a storyteller format. The book is priced at $50.

“[The series depicts] lively creatures on bright, energetic backgrounds,” Ott said. “[I hope] to embrace the magnificence of the various species, while bringing awareness to their tenuous position on planet earth.”

It was the message of Ott’s series that made Euphoric Stage want to host her as their first opening, Koch said.

“She deals with a lot of nature and with endangered animals and celebrating their beauty rather than mourning the loss of their species that is on the verge of being extinct,” Koch said. “We thought that it was more than just art. It was also caring about our world. We like artists who have depth to them and care about things going on in the world, not just the art itself.”

Koch and Ott said they hope the communities of both Niles and Dowagiac will come to the opening on Dec. 7 to network and to support the local fine arts.

“[Come] to appreciate nature, art and what we have to offer the community,” Koch said.

For more information or to get on the waiting list to be featured at Euphoric Stage, email hello@euphoricstage.com.