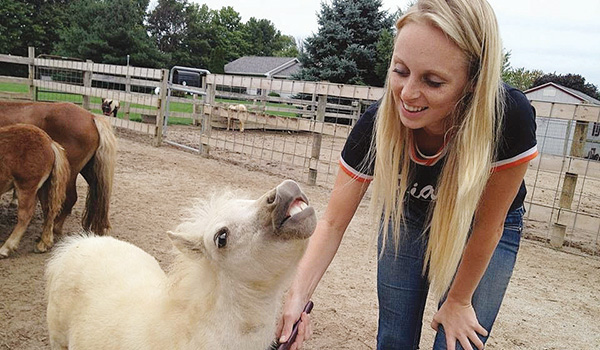 NILES — Rescued miniature horses got some big heart from Pizza Transit this Tuesday, after the local business donated 10 percent of their sales to a Niles organization that provides a facility for their care.

The donation was for Giving Tuesday, an international effort that inspired people to give to charities they find close to their heart. For Pizza Transit owner Sarah Brittin, that cause was Vinewood Hill Miniature Horse Rescue in Niles.

“I’m a huge fan of animals and it is an awesome farm that people might not know about,” Brittin said.

Dany Gumz, the Vinewood founder and president, said she was grateful for the donation.

“I’m really appreciative of any local support that I get especially from a business,” Gumz said.

At Vinewood, horses are given a safe place to thrive, where they are rehabilitated for adoption. This year, the organization has rescued 15 miniature horses and found homes for 12 so far.

Gumz said the horses she rescues come to her in a variety of conditions.

Many of them arrive at the farm needing medical care. Because of this, Gumz said donations like Pizza Transit’s can help her to provide food, medicine and blankets to the horses.

Last year for Giving Tuesday, Brittin donated $200 to Vinewood. At the time, Gumz said she was still working to achieve her nonprofit status. She recognized Brittin for seeing her organization’s potential.

“She was one of the first people that saw what we were doing,” Gumz said. “I’m really thankful for her doing that.”

Gumz said she achieved nonprofit status in January and has continued her mission to rescue miniature horses.

At Pizza Transit, Brittin said customers responded positively to the effort. Many also wanted to learn more about the organization, which she said was another underlying goal of the effort.

Pizza Transit has initiated a number of efforts to give back to their Niles community.

“I think it is one of the things people love about small business,” Brittin said. “It sets us apart. We have been open for 31 years. It’s our way to say thanks to the community. It’s nice to show that we not only enjoy being part of the community but doing things for the community as well.”