NOVAK: Enjoy the moment as they do not happen often 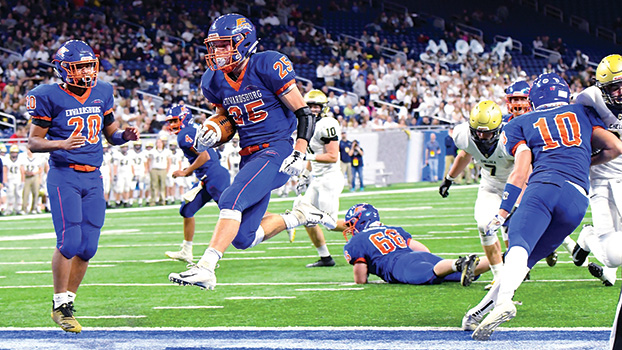 Caden Collins jumped into the end zone as he scores the opening touchdown for Edwardsburg in its 28-7 win over Chelsea. (Leader photo/KELLY SWEENEY)

DETROIT — A lot of things have changed in the 28 years in between the two high school football state championships I have had the privilege to cover for Leader Publications.

The Pontiac Silverdome is no longer in use as it has been replaced by Ford Field as the home of the Detroit Lions and the MHSAA state finals.

I had a lot more hair back in 1990 when Dowagiac captured the Class BB state title in the aforementioned Silverdome.

But one thing has not changed and that is my friendship with former Chieftain assistant coach and current Edwardsburg defensive coordinator Randy Brooks.

Brooks has had an outstanding career as an assistant football coach and a head softball coach.

He led the Dowagiac softball program to the Class B quarterfinal victory and a spot in the state final four in 1993.

The Chieftains were one of the area’s top programs during Brooks’ tenure.

After leaving the Dowagiac program, Brooks led Cassopolis to the state final four before moving on to Edwardsburg where the Eddies were one of the area’s top programs year in and year out until he retired two years ago.

Dowagiac’s loss was Edwardsburg’s gain when Brooks joined the football staff. He, along with the other assistants and head coach Kevin Bartz, have built the Edwardsburg program into a juggernaut.

The Eddies have won numerous Wolverine Conference championships, been to the state semifinals a handful of times and now have a state championship.

The hard work that the players and the coaches have put into this program over the past decade should be commended.

I was asked last Friday night not long after the final whistle had blown at Ford Field if the Eddies could be back in Detroit next season.

Anything is possible with this program, but for now, I would rather everyone just enjoy the moment, because I can tell you from experience, they do not happen very often.