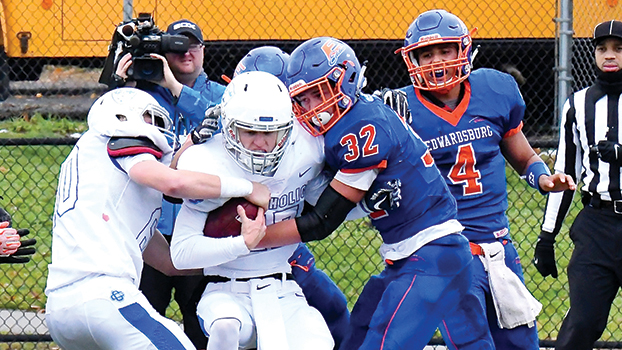 Chase Sager and the Edwardsburg defense will try to bring home the Eddies’ first state championship when it takes on Chelsea at Ford Field Friday night. (Leader photo/KELLY SWEENEY)

EDWARDSBURG — Back-to-back trips to Ford Field in Detroit for the Edwardsburg football team will hopefully give the Eddies the advantage over Chelsea Friday night.

Edwardsburg is in the search for not only the district’s first state championship, but its first 14-win season.

Opponent Chelsea is headed back to the championship game for only the second time in school history. The Bulldogs (10-3) lost the Division 3 title game to Orchard Lake St. Mary’s 29-12 in 2015.

The Eddies (13-0) avenged that loss by holding off the Cougars 46-44 in overtime last Saturday in the semifinals.

Chelsea punched its ticket to the title game with a 38-13 victory against Williamston.

The Bulldogs are a deep team as they play true two-platoon football with 22 different starters. This helps keep Chelsea fresh throughout the contest and it has helped keep them healthy through the season.

The Bulldogs entered the postseason coming off a loss to Alpena, but seem to be peaking at the right time with playoff wins against Grosse Ile (28-21), Milan (35-14) and Farmington Hills Harrison (21-14).

Starkey has completed 165-of-261 passes for 2,091 yards and 22 touchdowns with only seven interceptions.

Neff has 1,057 yards receiving on 63 receptions and 15 touchdowns. McDaniels has rushed for 899 yards on 181 attempts with 16 touchdowns.

Taylor has six interceptions on defense.

The Bulldogs are coached by Josh Lucas, who is in his first season at Chelsea after having spent three years at Allegan in the Wolverine Conference.

Bartz planned on giving Lucas a call after returning home to congratulate him on getting to the state finals.

“Once we get back, I will congratulate him and we will get our stuff taken care of,” said Edwardsburg coach Kevin Bartz. “When they (Chelsea) called and asked my opinion of Josh, I told him I had a very high opinion of him. I was glad to see him get that job and it is neat running into him again.”

“Now we prepare like we have every week,” Bartz said. “We start breaking down game film here in a couple of hours. It is exciting to be here. The kids are going to enjoy this.”

The Eddies have outscored their opponents 677-131 this season.

Edwardsburg has run the football for 4,850 yards and thrown for 654 yards.

Defensively, the Eddies have allowed just 620 yards rushing and given up 1,391 yards through the air, much of which has come the past two weeks against a pair of outstanding quarterbacks.

Caden Goggins continues to lead the way offensively with 1,355 yards on 106 carries with 23 touchdowns. He is averaging 12.8 yards per carry.

Tre Harvey is 20-of-30 for 624 yards and nine touchdowns. He has thrown just two interceptions.

Goggins is his favorite receiver out of the backfield with 10 catches for 344 yards (34.4 per catch) and four touchdowns.

Defensively, Edwardsburg is led by Drew Bidwell’s 72 tackles, including seven for loss.

Dylan McColley has 68 tackles, including nine for loss, five fumble recoveries and a pair of interceptions.

Dylan Hursh has 60 tackles, including a team-high 11 for loss.

Bryce Blue leads the team in interceptions with four, while Cayden Calhoun, Conner Nelson and Mac Gaideski all have two interceptions.