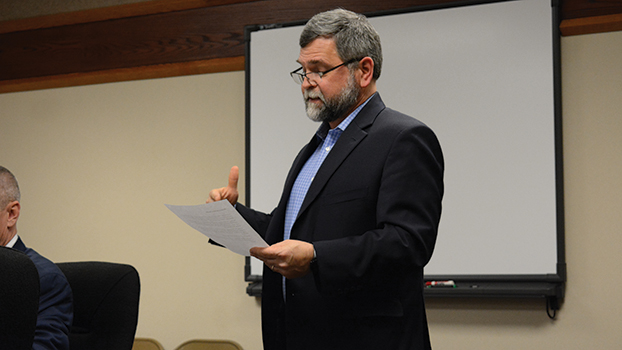 Director of Campus Security and Conduct Lyndon Parrish presents to the SMC Board of Trustees Monday evening. He said SMC will not be changing its policy toward recreational marijuana. (Leader photo/SARAH CULTON)

DOWAGIAC — Despite having been legalized in the state of Michigan, one local institution is “just saying no” to recreational marijuana.

“There have been lots and lots of discussions around the state about what this might mean,” said SMC President David Mathews. “So, we asked Lyndon Parrish to speak, as he is involved in all things conduct.”

In short, recreational marijuana will not affect the college’s current policy, Parrish said. Due to federal policies, SMC will not be changing its own policy toward marijuana, and the drug will remain prohibited on SMC’s campus.

“Federally, marijuana is still a schedule one drug,” Parrish said. “It is still illegal.”

The Drug-Free Schools and Communities (Campuses) Act of 1989 and the Federal Anti-Drug Abuse Act of 1988 have put in place several requirements with which all institutions of higher education receiving any form of federal funding must comply with. Among other requirements, recipients must have in place policies and a specific program that prohibits the unlawful possession, use or distribution of illicit drugs and alcohol by students and employees on campus or as any part of its activities.

“Basically, if we want to continue to any form of federal funding, we cannot allow any illegal drugs on campus, and marijuana is still illegal federally,” Parrish said.

A memo was sent to both students and staff to make them aware of SMC’s policy on recreational marijuana.

President Mathews said the policy was about keeping people out of trouble and ensuring that SMC is in compliance with federal law.

“We are not bucking a trend. We are not saying, ‘screw what voters said,’ no,” Mathews said. “We are following federal regulation, just as we have with every federal regulation. … Regardless of how you feel about Proposal 1, it does not change federal law.”

Both Parrish and Board Chairman Tom Jerdon noted that SMC did not change its policy on marijuana when medical marijuana was legalized, as federal disability laws do not allow for accommodations for on-campus use of the drug.