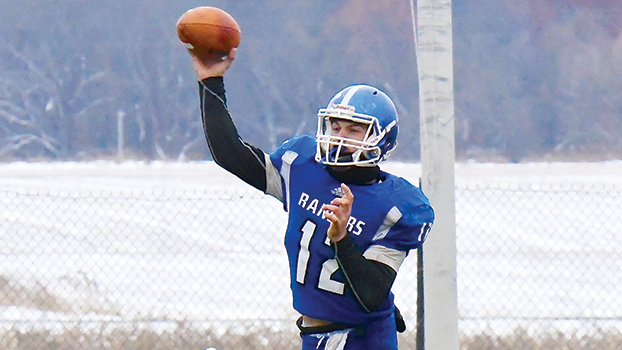 Cassopolis senior Dylan Green ran for a pair of touchdowns and threw for a pair as the Rangers lost to Madison Heights Madison 37-34 in the Division 7 state semifinals Saturday. (Leader photo/File)

JACKSON — For the second time in three years the seventh-ranked Cassopolis Rangers traveled 106 miles northwest to Dungy Field in Withington Stadium at Jackson High School to earn the right to play for their first MHSAA state football championship at Ford Field in Detroit this weekend.

In their way stood the No. 3-ranked Madison Heights Madison Eagles, who lost in the state semifinals last year to Saugatuck.

Both teams have had excellent seasons on both sides of the ball, which left many to wonder what type of game this would be. Offensive? Defensive?

Throw the defense out the window, except for the fact that each team had three turnovers.

What stole the spotlight was the offense, with an onslaught that turned the game into a thriller, with Cassopolis coming up just short, 37-34.

Madison Heights Madison did not face a team like the Rangers this season.

Madison Heights’ defense stood strong on the Rangers’ first drive of the game, only allowing three yards and forcing a punt.

Madison’s Austin Brown, also a baseball standout, who will play baseball for Marshall University next school year, quickly showed why he is considered one of the best quarterbacks in Michigan.

Accounting for 63 yards though the air and on the ground, Brown capped an eight play, 75-yard drive on a three-yard run. The Eagles would lead 6-0 after the failed conversion.

An excellent kickoff return to the Cassopolis 45-yard line got the Rangers rolling.

Facing a second-and-eight, Rangers quarterback Dylan Green found Tyrese Hunt-Thompson down the left side for a 52-yard pass, which set up a Green 1-yard touchdown run. Cassopolis would have the first lead of the game after Lane Francis’ extra point sailed through the uprights.

Brown would continue to be a problem for Cassopolis as on the Eagles’ second drive of the opening quarter, he led his team on an 81-yard drive, which he finished himself on a one-yard run.

Cassopolis dominated the second quarter as it used 16 plays to go 73 yards, while eating nearly nine minutes off the play clock. Green had his second rushing touchdown of the game, this time from five yards out.

Cassopolis’ J.J. Hart picked off a Brown pass on the ensuing drive and Green found Hunt-Thompson on a quick slant, which resulted in a 43-yard touchdown reception.

The Rangers had their second lead of the game at 21-14.

But the Eagles dug deep and Brown accounted for this third rushing touchdown of the first half and the Madison led 22-21 at halftime.

Both teams punted and turned the ball over on their first two possessions of the second half.

Brown scored for the fourth time in the contest as the Eagles opened up a 30-21 lead on the Rangers.

Cassopolis’ Owen Gardner kept the game close as he scored on a 10-yard run to make it 30-28 at the end of the third quarter.

Facing a third down and 12 on the Cassopolis 46-yard line, Brown found a mismatch on the left side and Keaton Campos muscled the ball out of the air and scampered to the end zone. An extra point would give the Eagles a two-score cushion with nine minutes left in the game.

Back-to-back 34-yard passes to Gardner and Hunt-Thompson, the second of which led to a touchdown, had the score at 37-34 and set up a nail-biting finish.

Mason Polomcak picked off a Brown pass on third down and 12, and the Rangers had the opportunity to turn the tables.

Green led the Rangers all the way down to the Eagles’ 13-yard line. and a field goal attempt that would tie the contest.

The Eagles were able to gain a first down to run the clock out and advance the Division 7 championship game against New Lothrup at Ford Field in Detroit at 10 a.m. Saturday.

“They (Eagles) were able to capitalize at key points in the game.” said an emotional Dan Purlee. “Our guys played so well. I’m incredibly proud of this team and everything they accomplished.”