Edwardsburg to play for the Division 4 state title 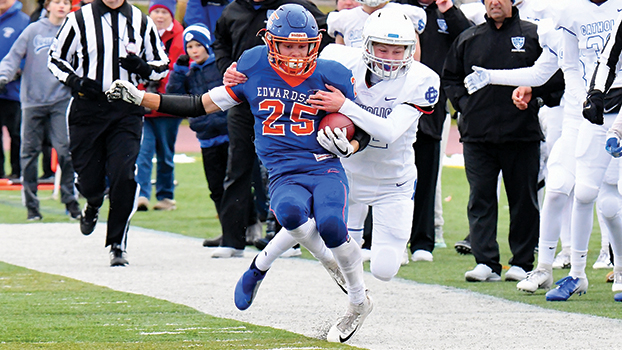 Edwardsburg senior Caden Goggins (above) gets pulled out of bounds by a Cougar defender. Goggins rushed for 167 yards and scored four touchdown for the Eddies, who avenged their 41-31 loss to Grand Rapids Catholic Central in last year’s Division 4 state championship game. (Leader photo/KELLY SWEENEY)

After falling to Grand Rapids Catholic Central 42-31 in last year’s Division 4 state championship game, it has been the goal of the Edwardsburg football team to get back to Ford Field in Detroit.

The Eddies accomplished that goal in Vicksburg Saturday afternoon with a thrilling 46-44 win over Catholic Central in overtime.

Edwardsburg will now face Chelsea for the Division 4 championship at 7:30 p.m. Friday night at Ford Field.

The rematch of the 2017 championship game lived up to its billing.

Despite racing out to a 24-0 first-half lead, Edwardsburg had to withstand a second-half onslaught by the Cougars, who eventually tied the game at 30-30 with 5:46 remaining in regulation.

The Eddies (13-0) answered with a quick touchdown drive that culminated with a one-yard Isaiah Mitchell run and a Chase Sager 2-point conversion that gave Edwardsburg a 38-30 advantage with 1:56 remaining.

The Cougars went 68 yards in the final minute and a half, scoring with 19.7 seconds remaining on a Nate Trudeau eight-yard pass reception from Joe Collins.

The all-important 2-point conversion was good, and the teams were headed to overtime deadlocked at 38-38.

The Eddies went on offense first and did not waste their opportunity as Mitchell hauled in a six-yard Tre Harvey pass. Sager added the 2-point conversion and Edwardsburg led 46-38.

A seven-yard Malachi Love touchdown run for Catholic Central on its overtime possession meant that the 2-point conversion stood between the Eddies and Ford Field.

The Cougars came out in an I-formation for its conversion attempt and when backup quarterback Joey Silveri was stopped well short of the goal line by the Edwardsburg defense, the celebration was on.

“We have been on process to get back to Ford Field, and whoever was in our way we were looking to take care of,” he said. “We never really did mention the revenge factor. This was our next step to get there.”

Bartz said that despite the early lead, the Eddies knew they were going to be in a dogfight.

““You knew it was going to be one of these kind of games,” he said. “They did a great job coming back. Our kids didn’t flinch or panic. I thought we could score. We just needed one stop, and we got it at the end.”

The Eddies could not have asked for a better start against Catholic Central.

Sager and Caden Goggins scored first-quarter touchdowns on runs of one and 48 yards.

Edwardsburg extended its advantage to 24-0 when Goggins raced 55-yards to the end zone to score the second of his four touchdowns on the day.

The Cougar’s comeback started midway through the second quarter.

Nick Hollern scored on a one-yard run, while Drew Gommesen caught a six-yard touchdown pass from Silveri to cut the Eddies’ lead to 24-16 heading into halftime.

Goggins scored again to start the second half, this time on a seven-yard run, but the Cougars continued to mount their comeback.

Gommesen scored again on a 10-yard pass reception to complete the third-quarter scoring.

Trailing 30-23 entering the final 12 points of regulation, the two Trudeau touchdown passes tied the score and set up the thrilling finish.

Goggins had a huge day for the Eddies with 167 yards rushing on 13 carries and the four touchdowns.

“What a game,” Goggins said during the postgame celebration. “It feels so good [to be going back]. We have been working for this for so long. This week, we have been focused more than ever and to beat the team that knocked us off last year to get to the state championship feels great.”

Goggins said that the Eddies never lost focus during the Cougars’ comeback.

“They started shutting us down a bit, but we never gave up and kept pounding,” he said. “It worked. We wanted this so bad, and I think that is how we pulled off the win.”

Edwardsburg finished with 366 yards on the ground, while Harvey was 3-of-5 throwing the ball for an additional 53 yards.

For the second straight week, the Edwardsburg defense had to withstand a passing barrage.

Collins threw of 293 yards and three touchdowns as the Cougars went 20-of-33 threw the air and rushed for 114 yards.