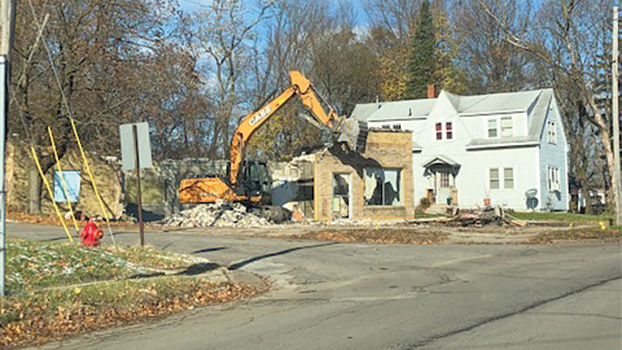 A building at 401 N. Redbud was recently demolished so that the city of Buchanan can proceed to complete an intersection improvement project at Fourth and River streets. (Submitted photo)

BUCHANAN — A vacant structure known as the “old Trophy building” has been demolished in Buchanan to pave the way for an intersection improvement project.

Buchanan City Commissioners approved the project in the spring and the demolition of the building at 401 N. Redbud Trail, marks the first step.

City manager Bill Marx said the effort of the project is to align Fourth and River streets.

“Right now, it is offset and it is kind of a cumbersome intersection,” Marx said. “We have a narrowing of Redbud right at that intersection and then we have a traffic light system that is actually failing.”

The sensors in the pavement that help the traffic signal to function have been worn down, causing frustration from drivers who sometimes have to sit at the light for several cycles.

With the upgrade, drivers will see a new traffic light and sensors, as well as ADA compliant sidewalk ramps. Construction for the project is anticipated to begin in March 2019 and take about a month and a half to be completed.

“In order to prep for [construction], we had to get the building down fairly soon, so that no obstacles would be in our way,” Marx said. “We had to take down the building to clear the right of way.”

Marx said there is a residence near the demolished building that shares the property. He said the residence, a house converted into apartments, will have an improved driveway that will be structured to open onto Fourth Street instead of Redbud Trail. Marx expects it to be an improved safety factor for residents on the property that will allow them to enter and exit with the presence of less traffic.

The trophy building has served as a home for several Buchanan businesses, including a gas station. The owners of Trophy Works moved the business operation to St. Joseph. Since then, the building has fallen into disrepair. The building was deteriorated and had a collapsed roof.

Marx said he was glad to see the first phase of the project completed.

“We are excited that that is happening, I know there are some people that have a memory of the place, but it has been obscure for so long,” he said. “It has been a vacant property for years. It was basically deemed a little bit of an eyesore, so we are happy to clear that up and we hope the intersection will be pleasing to the eye when it is complete and functional.”

The city of Buchanan budgeted from its road funding to cover the costs of the improvement project. Marx said the intersection portion of the project will cost about $173,000. The cost to replace the traffic light is $300,000 – though the majority of this cost will be covered through state and federal funding. The city will pay about $58,000 for the traffic light. The property owner agreed to pay for the demolition of the building.

“I think there is a general consensus that something needed to be done with that intersection,” Marx said. “It was inefficient and awkward. Talking with the engineers, short of spending lots and lots of money there, this is a pretty reasonable amount to spend to get the improvements.”