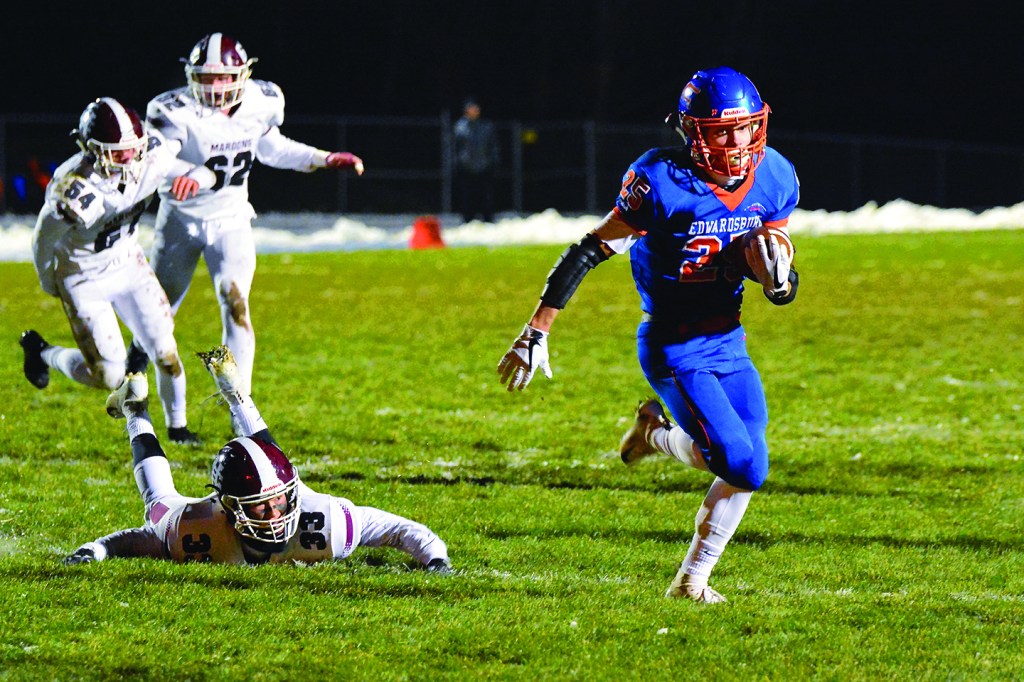 Edwardsburg’s Caden Goggins leaves the Holland Christian defense in his wake en route to one of his four touchdowns. (Leader photo/KELLY SWEENEY)

EDWARDSBURG — The run to Ford Field continues for the Edwardsburg football team.

A 40-point second half explosion lifted the host Eddies to a 56-21 win over Holland Christian in the Division 4 regional championship game and a spot in Saturday’s state semifinals.

Edwardsburg (12-0) will face Grand Rapids Catholic Central at Vicksburg in a rematch of the 2017 Division 4 state title game.

Kickoff is slated for 1 p.m.

The Eddies found themselves in an unusual situation at halftime when Holland Christian trailed 16-6.

Edwardsburg has played in just one close game this season, a 38-22 win over Vicksburg.

The Eddies regrouped at halftime and shifted its running game into high gear for the final 24 minutes.

Edwardsburg outscored the Maroons 16-7 in the third quarter and 24-8 in the final 12 minutes to turn the game into another rout.

Despite its best efforts, Holland Christian was unable to contain the Eddies’ running backs.

Caden Goggins rushed for 203 of Edwardsburg’s 525 yards on the ground and scored on touchdowns of 64, 15 and 57 yards. He also caught a 77-yard touchdown pass from Tre Harvey in the fourth quarter that sealed the victory.

Mac Gaideski, who rotates with Goggins, added 109 yards on just five carries with touchdown runs of five and 61 yards.

Isaiah Mitchell had the other Edwardsburg touchdown on a run of 16 yards in the closing moments of the game.

Defensively, the Eddies did their best to contain Holland Christian standout quarterback Wilson Wirebaugh and his big wide receivers.

And while Wirebaugh threw for 306 yards on 17-of-37 passing, the Eddies were able stop the Maroons’ ground game.

Conner Nelson led the way with six tackles and an interception. Gaideski had four stops, while Harvey and Goggins both intercepted a pass and Dylan McColley recovered the fumble.