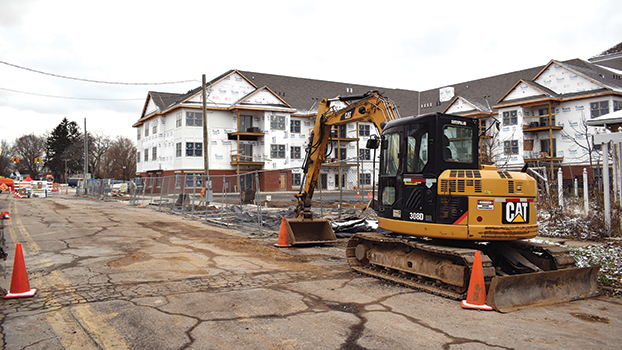 A tractor sits outside the construction site for senior living facility Berkshire Niles. The development is one of three that a company General Capital Group is working to complete in downtown Niles. (Leader photo/KELSEY HAMMON)

NILES — Since expressing interest in building affordable senior living for Niles residents, Wisconsin-based developer General Capital Group has decided to sign on to more projects that could significantly change the landscape of Niles’ downtown district.

Sig Strautmanis, a partner with the organization, was eager to give an update on the three projects that the company is working to complete in the near future.

Those who have passed through the intersection at Third and Broadway streets have likely seen construction progress on the 55,000-square-foot, independent senior living facility. Strautmanis expects the 53-unit building to be ready for occupancy in March 2019. Living space is currently being pre-leased.

“We have had tremendous interest,” Strautmanis said. “We are thrilled, and it really speaks to the demand for high quality, affordable senior housing alternatives in Niles.”

Over the summer, officials with General Capital Group proposed an idea to transform the former post office into another affordable housing facility. The company proposed creating a 60-unit apartment complex that will be rented as workforce housing. The plan also includes building a new structure on the south side of the property, which will be connected to the building with a plaza. Maintaining some of the historic structure’s design integrity will be part of the effort.

Since then, Strautmanis said the developer has received all needed approval from the city of Niles to move forward with the project. An application was submitted to the Michigan State Housing Development Authority in the hopes of obtaining affordable housing tax credits, which will help to finance the project. Strautmanis said he expects a response in January.

General Capital will invest about $14 million in the Niles Post Office Apartments.

Plans for construction will begin pending the response from MISHDA, Strautmanis said.

With a roughly $18 million investment, General Capital wants to completely renovate the Section 8 housing facility, which is currently known as the Four Flags Plaza. Strautmanis said General Capital closed on a deal to purchase the property Friday.

“[The building] is in good structural condition, but needs updating and a lot of systems will be updated.”

This will include complete renovation of the individual residents’ living space and a number of energy-efficiency upgrades.

While the Section 8 status will remain the same, Strautmanis is hoping to provide a breath of fresh air to current residents with the upgrades. Despite improvements, Strautmanis assured that residents rents will not rise.

Strautmanis said General Capital is working with Oakwood Construction, a Michigan-based general contractor, to develop a day-by-day schedule to minimize disruption to the residents to and accomplish the renovations in phases using an “expedited” process. He said the project is seeking not to displace residents which will be accomplished by completing phases of construction during the day and allowing residents to return during the evening and no construction during weekend hours.

“It’s not like we are just going to tell the residents to leave,” he said. “We are going to orchestrate this process very carefully.”

KMG Prestige, a Michigan-based property management company, is being brought on to take over property management. Mickey Hutchison, the Four Flags director, will be retiring. Strautmanis commended her for offering exceptional care to residents.

Strautmanis said interior renovations are planned to be completed by the end of the summer 2019.

The grounds outside the building will also be upgraded and include a prominent display of the four flags associated with Niles.

Once completed, Strautmanis said he hopes the developments will emphasize the company’s mission.

“We really believe in providing high quality, affordable housing,” Strautmanis said. “What we are super proud of is that we worked with the community in each of these cases to design buildings that were appropriate for the area.”