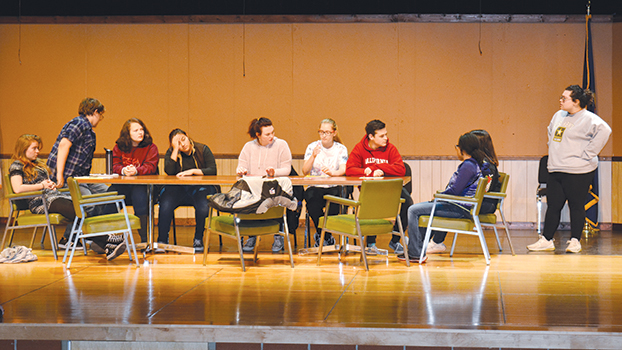 DOWAGIAC — Last week, 12 Dowagiac Union High School students sat around a table discussing a life or death decision — whether or not a young man was guilty of murder beyond a reasonable doubt.

Despite the realistic tension in the room as students argued and raised their voices to make themselves heard, the students would not be sending or saving a man from the electric chair that night — they were simply rehearsing for an upcoming play.

The newest fall play by the Dowagiac Drama club, “12 Angry Jurors,” debuts this weekend at the Dowagiac Middle School Performing Arts Center, 57072 Riverside Dr., Dowagiac. Performances will be at 7 p.m. Friday and Saturday, and at 2 p.m. Sunday. Student and senior tickets are $5. Adult tickets are $7.

“12 Angry Jurors” is based on the story of “12 Angry Men,” a 1954 teleplay by Reginald Rose. The story is probably most famous for the 1957 film of the same name staring Henry Fonda. The story is a courtroom drama, following the deliberations of 12 jurors as they attempt to determine if there is reasonable doubt in the case of a young man who has been tried for murder.

The production will be the first time Dowagiac Union Schools has hosted a fall play in many years, said Director Tammy Mammel.

“I really wanted to restart the fall program,” she said. “I had to come up with something fast that we could do, and I wanted something people recognized and related to. I also wanted something with a good message. This one kind of just popped into my mind and I thought, ‘yeah, we can do this one.’”

Beyond thinking that the selection of “12 Angry Jurors” was beneficial for students due to its message of truth and justice, Mammel said she believes just participating in theater can teach students confidence, teamwork and dedication.

Should the production prove successful, Mammel is hopeful that she will be able to revive the fall productions for the drama club.

“I would really like to be able to build the program up and get to a point where we could do some bigger shows in the fall,” she said.

With all of the hard work Mammel and the students put into “12 Angry Jurors” and the first fall production in years to come to an end this weekend, Mammel said she hopes the community will attend and support the drama club and the students in it.

“This is a great group of kids, and they have worked really hard,” she said. “I think it would be great if everyone could show up to support all the hard work they have put into this.”