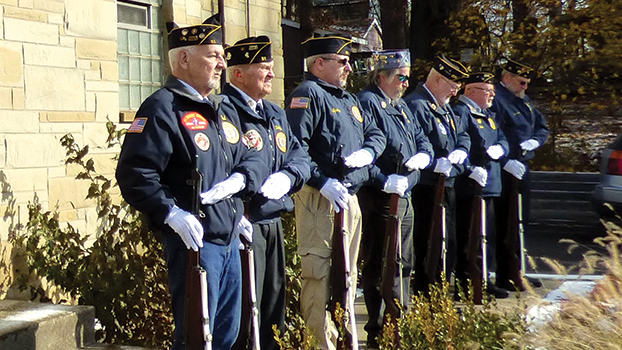 A firing squad honors veterans on the 100th anniversary of Armistice Day in America. The officers were celebrating Veterans Day in Buchanan. (Leader photo/DEBRA HAIGHT)

BUCHANAN – It was a special day in Buchanan Sunday as people remembered the 100th anniversary of the end of World War I and heard from World War II survivor Walter Stitt. The 94-year-old was an eyewitness to historical events, including the Battle for Normandy and the Battle of the Bulge in 1944 and 1945.

Stitt, who was a Lutheran minister in South Bend for 41 years before moving earlier this year back to his home state of Ohio to be near his family, was scheduled to speak Monday morning to Buchanan High School students and Monday evening to the public at Michigan Lutheran High School in St. Joseph.

Stitt first saw action when his combat unit landed in Normandy in July 1944, a month after the D-Day invasion. He was a gun loader and gunner in the Third Armored Division and saw action in 1944 and 1945 in France, Belgium, and Germany including during the Battle of the Bulge.

Sunday, Stitt talked about his experiences during the war as well as his visits back to Europe to visit American cemeteries. He was wounded at least twice, the last time when his Sherman tank was hit by a panzerfaust during the Battle of the Bulge, which killed his tank commander.

“It was three days before Christmas during the Battle of the Bulge and we were in a little town with three bridges in Belgium,” Stitt said. “We were surrounded by the Germans. They wanted the town and we defended it. We had tanks and they had infantry. We stayed there three days before they left.”

He noted it was hard when he was promoted from being a gun loader to a gunner.

“The hardest thing as a gunner was knowing that if you pushed your foot down on the pedal to fire, you knew it would kill someone,” he said.

Stitt said he was inspired in his youth by the “In Flanders Field” poem, which honored those who served and died in World War I. He memorized it and would think about it often both during and after his service in World War II.

Part of that poem talks of those in World War I throwing the torch to those following them to ‘hold it high,’” he said. “Only later did I think whether I was a torch bearer and what we were really doing. The answer was in the Declaration of Independence, that we hold these truths to be self-evident that we have the right to life, liberty and the pursuit of happiness. … That’s what we were all about and what servicemen are still all about.”

He was honored on one of those trips by a little town in Belgium that the Americans liberated. “They gave me a small tank replica and said ‘thank you for our freedom,’” he said. “That’s what we do all around the world in every war — we fight for people’s freedom.”

He said his trips back to Europe as well as a trip to a military cemetery in Hawaii were emotional ones. Cemeteries in France and Holland have markers for the thousands upon thousands of American servicemen who gave their lives in World War II, he said.

“I’ve been to the American cemetery off the beaches of Normandy twice,” he said. “I think of the people who were my age who never went home, who never got married or had kids. Each time I go, I wipe the tears from my eyes. … In Hawaii, my best friend from high school is buried. He went into the Marine Corps and was killed in Saipan.”