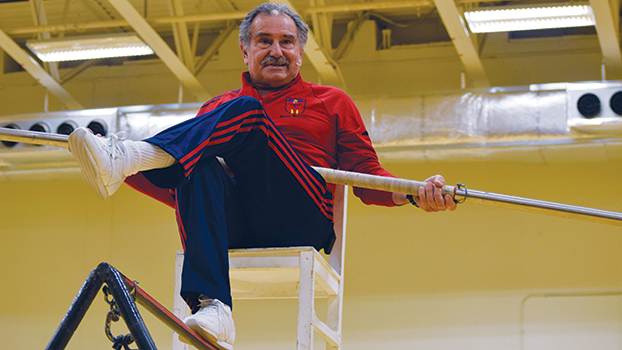 Wallenda is the sixth of eight generations of circus performers, including his three grandchildren. His family came to America from Germany and debuted at Madison Square Garden in 1928.

He demonstrated balancing on his big toes, heels to the inside, while focused on a point. “A regular 5/8-of-an-inch wire is the size of my thumb,” he said.

“Always keep your focus and never give up your dreams,” Wallenda said.

After standing on his head, he “chilled” seated in a chair balanced atop a 1.5-inch pipe.

“We’ve been acrobats, we’ve been jugglers, we’ve been clowns, we’ve performed on galloping horses, trained wild animals, even flown on the flying trapeze,” he said of the Flying Wallendas. “But for nearly 100 years, we’ve been known for one thing in particular: walking a slender strand, a tightrope, 25 or 30 feet in the air. We stand on our heads, ride bicycles and build pyramids.”

They set a Guinness World Record Feb. 20, 2001, in Sarasota by creating a 10-person pyramid suspended 25 feet.

The Wallendas, who starred in the Ringling Bros. and Barnum and Bailey Circus throughout the 1930s and ’40s, for 16 years performed a seven-person pyramid on the high wire without harnesses or safety nets. The act weathered an earthquake in South America and a brief power outage in Fort Worth, Texas.

The legendary “slip” happened in Detroit in January 1962 when the pyramid collapsed. Two acrobats died. Tino’s Uncle Mario was paralyzed.

Founder Karl, 73, who introduced 7-year-old Tino to tightrope walking, fell to his death in March 1978 on a windy day in San Juan, Puerto Rico.

His family’s perseverance and faith allowed them to move beyond these tragedies to keep the act going. And clearly he’s never avoided risk in his life, as when he balanced above a Miami swimming pool filled with man-eating sharks. He’s crossed waterfalls and traversed between buildings.

“The largest I’ve done was in Korea with cables 60 or 70 feet in the air stretched over the Han River in downtown Seoul,” he said. “It was a distance of one kilometer, 3,300 feet — 11 football fields end to end. The highest walk I’ve done was a mere 320 feet at a height of 179 feet, rivaling an 18-story building.”

Wallenda, 68, apologized for a slight limp. “About a week ago I was doing some events at a prison around the Dallas-Fort Worth area. Whatever happened, my sciatica went crazy, but we’re going to do the best we can to give you a little entertainment.”

Because the show must go on, in the circus and in life.

Uncle Mario, the irrepressible paraplegic, crossed the Chicago River in 2006 on a “sky cycle,” a 350-pound contraption fitted with speed and direction controls in the balance pole. Mario, 74, died in 2015.