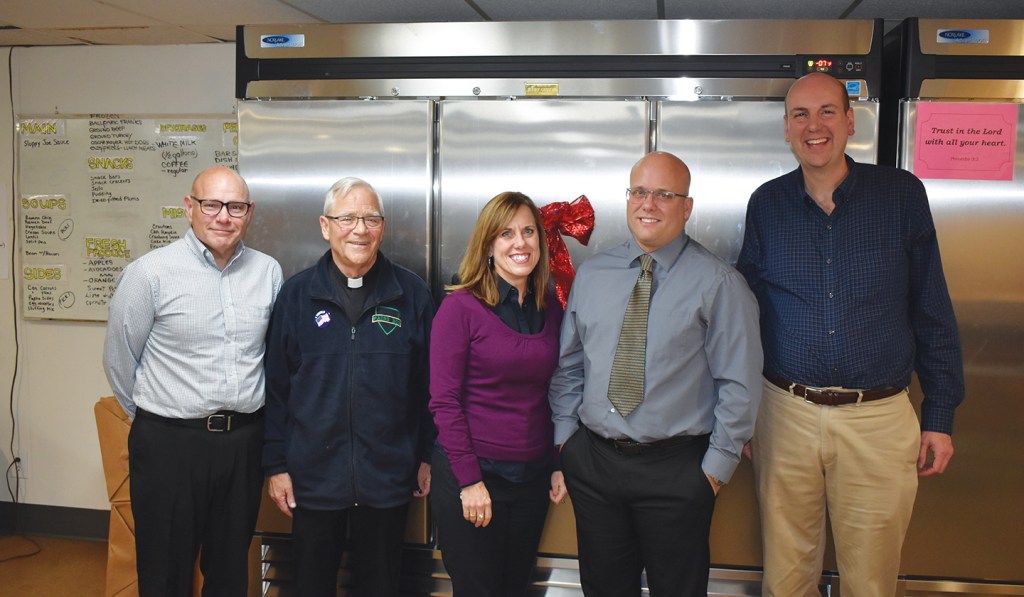 On Tuesday a small group gathered in the basement kitchen of Our Lady of the Lake Catholic Church. In the group were members from the Edwardsburg Food Pantry, a handful of pastors, a few spectators, and a family grateful for the profound impact of their parents and grandparents.

Linda Gibson, beloved mother and grandmother and lifelong Edwardsburg resident, died unexpectedly just under a year ago. When she passed, her husband, Jerry, wanted a commercial refrigerator dedicated in her honor to the Edwardsburg Food Pantry. In the basement of Our Lady of the Lake the refrigerator sat with a small, gold plaque to commemorate the gift and Linda’s memory.

When Jerry passed away, however, his and Linda’s children wanted to dedicate a similar gift to the food pantry. Indeed, the gift was nearly the exact same.

Jerry and Linda’s son, Doug Gibson, and daughter, Melissa Ryker, dedicated another commercial refrigerator in honor of their father to the Edwardsburg Food Pantry, which sits in the basement kitchen of Our Lady of the Lake right next to their mother’s.

Doug and Melissa remember their parents with fondness and admiration. They, and the Edwardsburg community, remember Jerry in particular as a man who always gave of himself, worked harder than most, and was unfailingly kind.

“When I think of my dad, my heart fills with a sense of pride and thankfulness. Dad lived a life of integrity, while always serving others,” wrote Melissa in a letter that was read allowed at Tuesday’s dedication.

Jerry’s ability to serve others will carry on for many years with the use of the commercial refrigerators.

“It is a great contribution,” said Stan Mason of the Edwardsburg Food Pantry. “Both of them really allow us to store more food. We’ve been doing a program called ‘Eating Healthy in the Burg.’ And the idea is to have more fresh vegetables and produce, and not so much canned processed food, to make life better for the people who need it the most.”

The symbolism of the refrigerators is profound. The appliances are symbols of marriage, community giving and donation begetting donation.

“There they are right there together as a visual of their relationship and their contribution,” Stan said.

The symbolism was not lost on Melissa and Doug as they cut the ribbon over their father’s freezer.

“They were both kind of in the background. They never did anything for attention. They did a lot of things that they just didn’t really want people to know about,” Doug said.

So the memory of Jerry and Linda as quiet, humble and kind givers lives on in a couple of refrigerators in a church basement. And who ever said appliances couldn’t be considered holy ground?