Dussel family cleans up after fire, prepares for holiday season 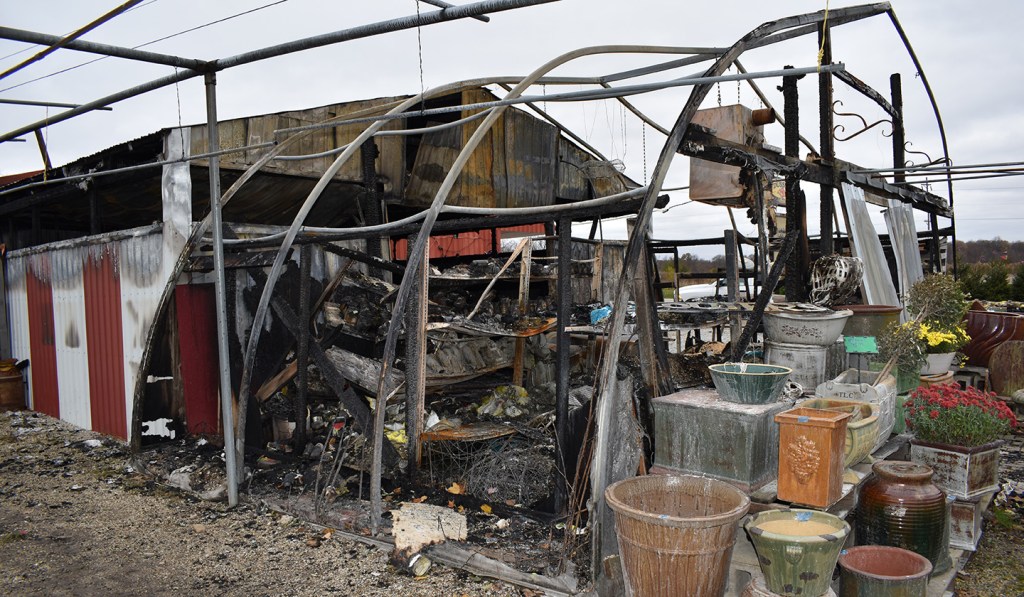 A greenhouse structure was one of many destroyed in a fire that damaged Dussel’s Farm Market over the weekend. (Leader photo/ADAM DROSCHA)

CASSOPOLIS— The morning of Sunday, Nov. 4, the Dussel family received a call from the local sheriff’s department. Their beloved community farm stand, Dussel’s Farm Market, caught fire on the east side of the building early that morning. According to owner Mark Dussel, the cause of the fire was still unknown by Tuesday, but had caused significant water and smoke damage.

The Dussels weren’t the only ones shocked by the fire. The greater Cassopolis community was as well, according to Mark.

“The community has been shocked and anxious,” Dussel said. “It’s going to be hard for some people not to get stuff for a little while.”

Dussel estimated the stand held nearly $100,000 worth of goods until Sunday, all of which was ruined by the fire.

“It gutted the inside of the building,” Dussel said. “It was a total loss on the inside.”

The farm stand was about 50 years old, according to Dussel, though the family had only operated out of it for 20 years. Although the fire was detrimental and discouraging, Dussel was grateful for the help of first responders, and was optimistic about bouncing back from the fire.

“First responders did a great job of controlling the fire and putting it out,” Dussel said. “There was 20 years of hard work in there, and we’re ready to put 20 years more back into it.”

The full extent of the damage was still unclear to Dussel, as was the exact cost to get the stand renovated and operational again. He estimated the repairs would be in the six-figure range.

The stand is out of commission for the time being, but Dussel’s Farm Market was set to begin operating out of one of the farm greenhouses a little over a week after the fire, according to Dussel.

Getting the farm stand back in business is crucial for the farm market.

“We have to get back online in the next 75 days. We’ll start planting in the next 60 or so days,” Dussel said.

The fire and push to get the stand back up and running considered, the Dussel family was just grateful for the outpouring of community support.

“Thank you to everybody for how they feel about the store,” Dussel said. “The community was great about outreach and getting us what we need.”

A grateful community gave back to the homegrown farm market in its time of need, but the Dussels are still determined to continue providing for the community as quickly as possible. With the holiday season fast approaching, the Dussels will soon be providing trees and wreaths. As Mark Dussel so rightly put it, “Farmers take it on the chin,” with a “there’s always next year,” attitude.

But the Dussels won’t be waiting until next year. They plan to continue providing what they can.

“We haven’t stopped working,” he said.