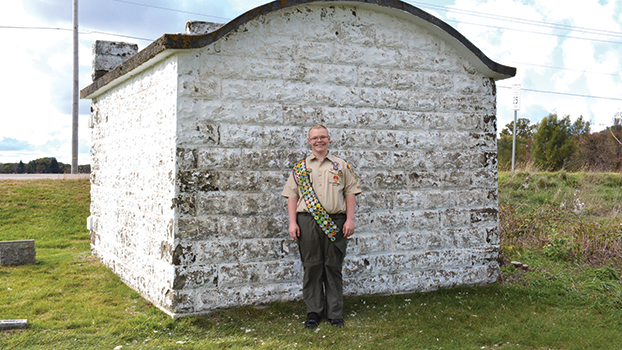 Michael Willis, 17, of Sister Lakes, has been working on improvements to Keeler Cemetery as part of his Eagle Scout project. (Leader photo/SARAH CULTON)

SISTER LAKES — Late last month, Michael Willis, 17, of Sister Lakes, stood in the middle of Van Buren County’s Keeler Cemetery and looked up at an American flag flowing in the wind.

“That’s what started it all,” he said.

It was same flag that Willis has passed all of his life, every time without a light to illuminate it — even during the night. Ever since he was a child, he told his mother that he was going to put a light on the flag, saying it was not right that the flag did not have one. Now, he finally has his chance.

“I’ve always wanted to put a light on top of it, so that’s what started this project, and everything else just came about as I thought of it,” he said.

Willis has been working on improvements to the Keeler Cemetery as part of his Eagle Scout project. For the project, he wants to place a solar light on the cemetery’s flagpole and place a veterans’ memorial near the center of the property. He is also working on general cleanup of the cemetery, working with other scouts to clean the area and power wash and paint a building on the cemetery property.

“My great-grandfather, my grandmother and my other grandmother are all buried over there,” he said, gesturing toward the back of the cemetery. “The cemetery deserves respect and care.”

The biggest part of Willis’ Eagle Scout project is a planned veterans’ monument. The teen said the monument will feature all five branches of the military and will honor the veterans buried in the cemetery.

“There’s nothing really here to show that there are veterans here,” he said. “My grandfather was a veteran, and I want to do my part to spruce up the cemetery. [Veterans] have sacrificed for us, so they should be respected.”

Willis said he is hopeful to complete the project by his 18th birthday in May 2019. By completing the project and becoming an Eagle Scout, he will be fulfilling a life-long dream, he said.

“My grandfather was a scout, and he always talked about how fun it was, which made me want to do it, too,” Willis said.

More than just continuing a family tradition, Willis said he is dedicated to community service, and he wants to honor veterans, a group he has always respected, with his Eagle Scout project.

For the project, Willis is fundraising through a GoFundMe page called Michael’s Boy Scout Eagle Project. The GoFundMe page has a goal of raising $4,500. He said he hopes the community will see his project and decide it is a worthy cause to donate to.

“Veterans give their time and service,” he said. “They give so much more than this, and we should honor them.”