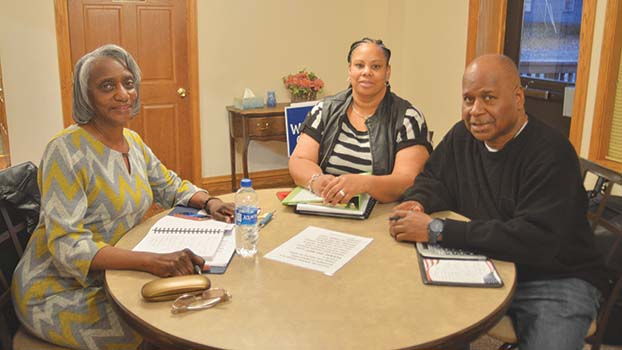 NILES — A newly organized club is seeking to take on projects that will better the Niles community and provide a place for residents to share ideas and discuss local issues.

The group, Helping Our People Evolve, or H.O.P.E., formed about two months ago with the goal of filling the need of the NAACP Chapter, which recently became inactive.

So far, the group consists of three members, Beverly Woodson, Yvette Greene and Doug Freeman, all of Niles. The residents were encouraged to formulate the group in order to fill a need in the Niles area, they said.

“The organization migrated out of the need that the NAACP is no longer functional in Niles,” Freeman said. “There was a vacuum of a community group that would service people in Niles.”

With the creation of H.O.P.E, the group’s founders are hoping to spur more community events, host regular meetings, educational forums and be a presence at a number of local volunteer opportunities. The group is open to all people in the community.

Already H.O.P.E has spearheaded some community events, including a Rock the Vote candidate forum in October. On Tuesday, H.O.P.E. is partnering with the South Democratic Club to host a Voter Festival and election watch party starting at 8 p.m. Tuesday, at the Bell Building, 305 N. Third St. The community is invited to attend the event and bring a snack to share.

Woodson said the efforts of H.O.P.E will be similar to the goals of the NAACP Niles chapter, though the members emphasized that that they cannot replace the organization.

“When you look at the NAACP, they [revolved] around education, spirituality and civics affairs, but now that we don’t have any of that going on, we are trying to bring it back to the forefront,” Woodson said.

In the weeks to come, H.O.P.E. will work to rally more members, achieve nonprofit status and prepare to complete several upcoming projects, including a winter coat, hat and glove drive and collect food donations for local pantries.

“We have a lot of projects in mind coming up,” Greene said. “We just have to put all the ties together.”

Greene said another major goal is serving as a bridge to the community and that means providing information on resources that can provide food, clothes or basic services to community members in need.

“A lot of people don’t know where to go,” Greene said. “We are trying to set up something where we can pass out literature, where you can go. We should not have people hungry, when we have pantries right here.”

The group is still in the preliminary stages of determining how it will operate, including options for funding. At this time, there are no membership dues. H.O.P.E. will meet at 7 p.m. on the first Friday of the month, at the Bell Building. To join, those interested are encouraged to come by during a meeting.

As for helping to fill a need, following the NAACP becoming inactive, the group said they want to assure community members have a voice.

“We don’t really want to be different [than the NAACP], we just want to be part of the community,” Woodson said. “The community has a lot of issues and they have no one to go to, so we are trying to make this place available to them to bring their concerns and issues.”